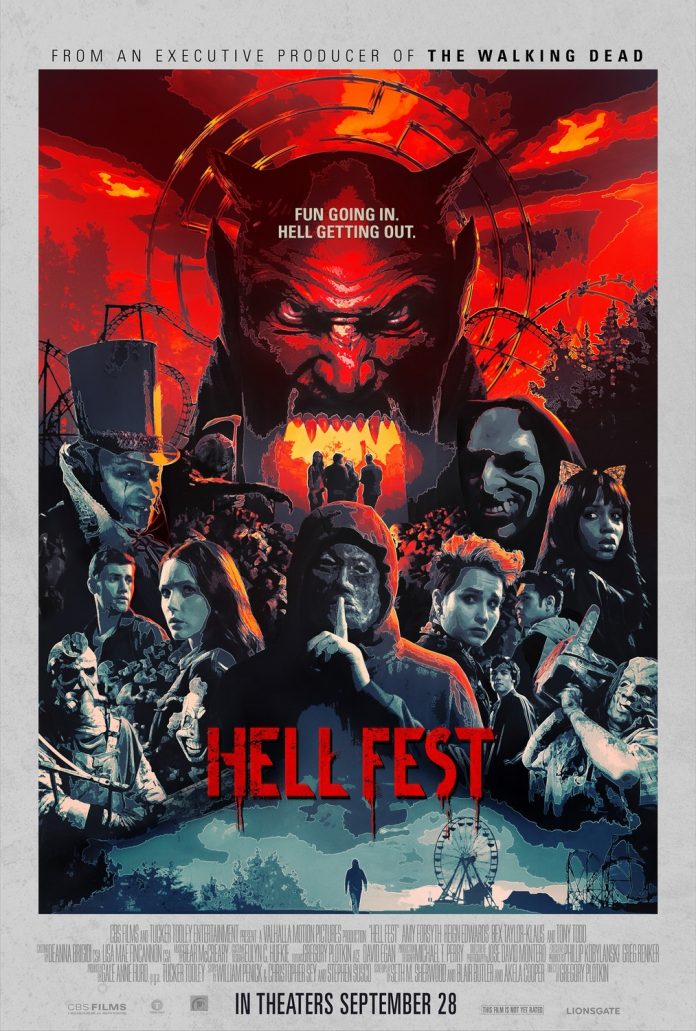 Many of the theme parks run Hellfest fright nights on Halloween and we’ve seen a number of jobbing actors as dead eyed anorexic zombies staggering about moaning and  trying to string a sentence together or as we later found out Amanda Holden’s RADA audition tape. Hellfest has taken the idea of those theme parks fright nights to their logical conclusion and placed a serial killer amongst the fancy dress adorned actors hired to populate the proceedings.

From the very moment Natalie (Amy Forsyth) appears you know just she’s going to make it to the end as she visits her friend Brooke (Reign Edwards) who tells her that they, along with her college housemates and their boyfriends are going to the local ‘travelling horror night’ though Edwards drawling delivery of the line sounds like, ‘travelling whore night’  giving the impression that it was going to be Amanda Holden in a repertory theatre tour.

Having been set up with a blind date Gavin (Roby Attal), the living embodiment of a wet blanket, the six of them set off for the theme park night unwittingly coming across a masked killer in a hoodie who stabs a girl to death in front of them which they mistake as part of the entertainment. And so the mayhem begins as the six of them lurch around the park unwittingly followed by the masked maniac and audiences finding that they’re now in the realms of the 80’s slasher movie and all that tropes that come with that notably the ‘who’s going to get bumped off first’ puzzle. In that respect when the kills do come they are inventive and pretty gory too with one paying homage to, ‘Zombie Flesh Eaters notorious splinter / eyeball interface. There’s a particularly decent sequence with  guillotine that doesn’t quite live up to its full potential and in a way that’s indicative of the Hellfest never quite embracing its 80’s slasher roots as much as it could and refusing to put a spin on any of the genre tropes that audiences might hope for. It’s killer is Michael Myers-lite with  no motive and even the scene with Candyman himself Tony Todd, here looking like the father of Maxim from The Prodigy, never capitalizing on his signature character. Hellfest’s  real strength is its theme park setting all neon lit, swarming with Halloween favourites of fear. But with only the occasional moment and its quirky ending, which wagers on there being enough demand for a sequel, audiences might feel a little short changed to want to re-enter the Hellfest.