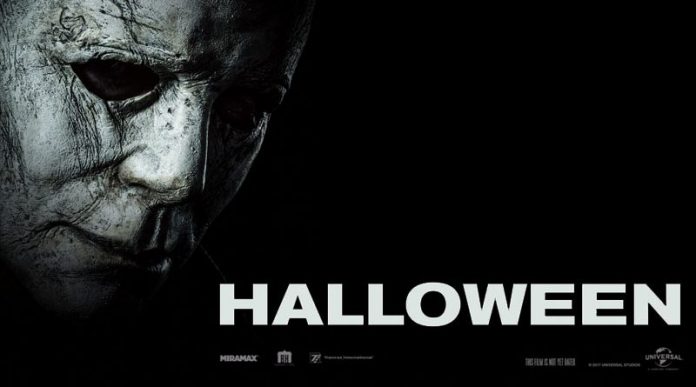 So it’s been 40 years since John Carpenter’s Halloween became the most successful independent horror film ever up that point in time making $47m from a $325,000 budget. Spawning ten sequels and remakes all of negligible quality its originator John Carpenter along with writers Danny McBride and David Gordon Green who directs also have decided to ignore the whole lot and made this latest version confusingly also called Halloween as a direct sequel

Entering horror iconography the killer Michael Myers didn’t go on to appear in a comedy spy spoof franchise Austen Powers or provide the voice for  green ogre Shrek but still resides in a mental asylum where a pair of investigative podcasters visit taunting him with his old mask. It’s on the anniversary of his night of butchery that he is to be moved by bus with a bunch of other loons and its of no surprise that the bus crashes and Michael slaughters the other inmates before making his way to the town where the carnage first began.

But his nemesis Laurie Strode (Jamie Lee Curtis) is still living there awaiting his return so that she can finish him off once and for all. Now a grandmother Curtis wears the most unflattering fright wig and like Linda Hamilton is tooled up ready for the ensuing onslaught that she expects Michael to rein down on the town when he arrives. It’s the last act of the film which is most satisfying with Laurie having alienated her family with her obsession about Michael’s return now being proved right and her house prepped ready to take him on.

For gore hounds the body count is high and some of the deaths are particularly gruesome as he wanders around the town swarming with kids in fancy dress trick or treating but the film steers clear of any child becoming a victim. Instead there’s a high school party going on which Laurie’s granddaughter is attending and makes her way home just as the streets are emptying after the first corpses begin appearing.

Directed by David Gordon Green whose last film was the straight true life drama Stronger this is a world away with some spectacularly grisly stabbings.  The script too is far better than many of the previous entries but there are plot holes mainly that with a notorious serial killer on the loose in a small town the police don’t call for every unit to flood the town looking of for the blade brandishing bastard. Carpenter’s original is a model of ruthless efficiency in suspense which this doesn’t quite succeed apart from a sequence in a bedroom stuffed with mannequins which works well. The script is also far funnier in places than might be expected and there’s a clever reference to Michael’s demise in the first film which is inverted here. This version of Halloween has a definite ending though with no suggestion or set up for a sequel but this has been made by modern horror masters Blumhouse productions so you can bet that if it does well mental Michael will be back.