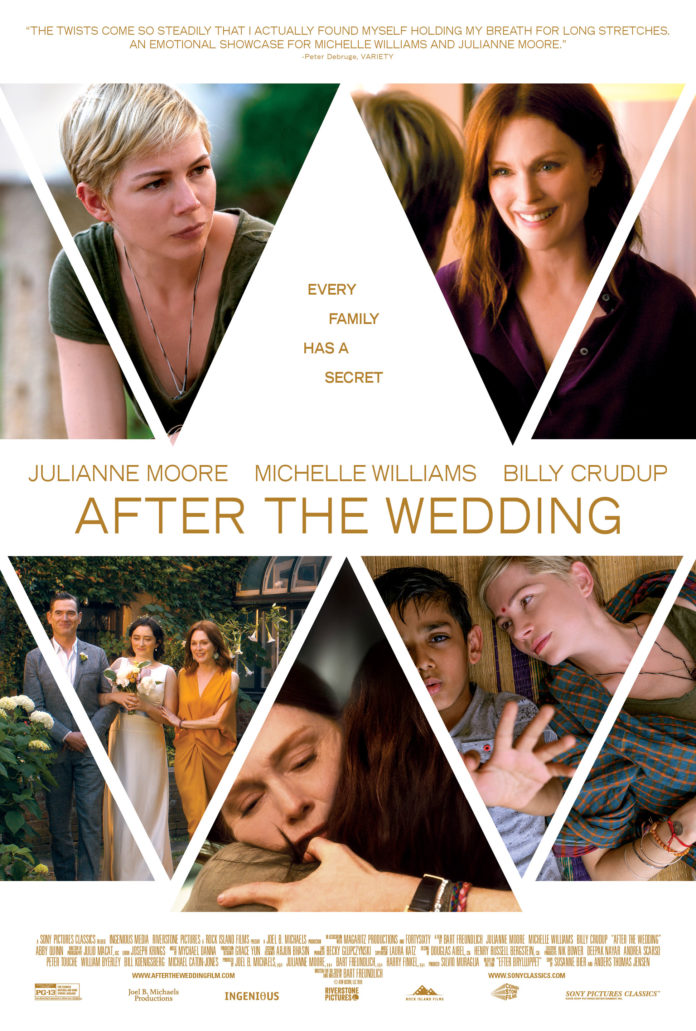 After the Wedding most couples sex life can be passionate and noisy and our Deputy Editor’s wife was a real screamer especially when he arrived home unexpectedly and walked in on her. Now she’s his ex-wife much like Isabel (Michelle Williams) is to Oscar (Billy Crudup) having remarried to Theresa (Julianne Moore). Still on cordial terms Oscar has invited Isabel to his daughter Grace’s wedding where the first bombshell revelation is made – Grace is actually Isabel’s daughter, a fact that is unknown to Grace.

After the Wedding is one of those grown up dramas so popular at this time of year with award nominations in the offing and there’s plenty of drama to be had here. Unfortunately when Grace has her first meeting with her newly found mother it’s not the histrionics and fireworks you might expect and if anything it is all rather low key. The conflict here is really between Isabel and Theresa both at opposite ends of the spectrum with Isabel, the manager of an Indian orphanage, and Theresa, the CEO of a large New York based company on the verge of a massive buyout that will make her incredibly wealthy.  Both women are of different temperaments and it is not easy to see what ‘type’ Oscar was drawn to. Except here Oscar and Teresa have two young sons but Theresa, on the verge of huge wealth wants to make a large and much needed charitable donation to Isabel’s orphanage the reason for which becomes clear as the film goes on. Even more curious is Isabel’s refusal to accept it and the two women are at loggerheads with a witheringly acidic put down thrown at her, ‘You think because you’re a do-gooder it makes up for your abandoning your own child?’

Both Williams and Moore are two of the best actresses of their generation with seven Oscar nominations between them and one win for Moore and both are as good as might be expected here. But its Moore who has the better, showier role in the latest in a line of challenging roles with the recent release of Gloria Bell aimed squarely at audiences of her own generation and here she has one especially heart wrenching moment in writer / director Bart Freundlich’s film. This is a solid little drama with some very good moments centred around secrets kept from partners and children but this isn’t quite the powerhouse it aspires to be.

Here’s the After the Wedding trailer…….