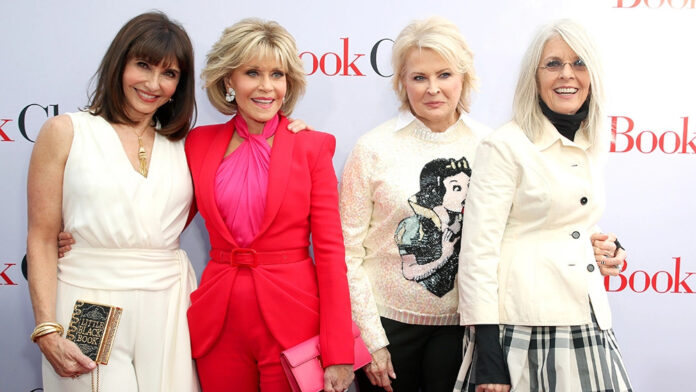 With more mature audiences returning to the cinema its no surprise that a sequel to the 2018 film Book Club has been greenlit with the announcement of Book Club 2 – The Next Chapter. The original 2018 film Book Club followed four lifelong friends whose lives were forever changed after reading 50 Shades of Grey in their monthly book club. In that respect we can only hope that Gemma Collins & Brooklyn Beckham make an effort to read a book that they don’t have to colour in. Against a lowly budget of $14m the film earned over $104m.

The film starring Diane Keaton, Jane Fonda, Candice Bergen, Mary Steenburgen, Andy Garcia, Don Johnson and Craig T Nelson and we estimated that the cumulative age of the cast was over 7000 a figure bested only by the number of children that Boris Johnson has fathered.

Filming starts in Italy, with Giancarlo Giannini (Across the River and Into the Trees), Hugh Quarshie (Breeders) and Vincent Riotta (House of Gucci) joining the sequel as new cast members. Book Club 2 will follow the four best friends as they take their book club to Italy for the fun girls trip they never had. When things go off the rails and secrets are revealed, their relaxing vacation turns into a once-in-a-lifetime cross-country adventure. Bill Holderman has returned as director with a script by Erin Simms.