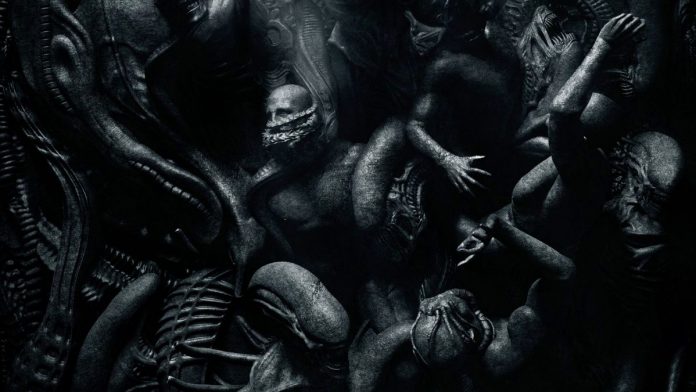 Part way through Alien Covenant one character says, ‘There’s so much that doesn’t make sense’ and it’s a line that many used when talking about it’s predecessor ‘Promethus’ a film that promised answers yet prompted yet more questions. . Alien Covenant looks to address those questions and its opening scene with Michael Fassbender’s David and Guy Pearce’s Peter Weyland reminds us of them before we join Michael Fassbender again this time as Walter a more refined upgrade to his earlier design taking care of a huge colonisation space ship, the Covenant,  on its way to colonise a new planet with its 2000 hyper-sleeping passengers. In many ways it’s similar to last year’s Chris Pratt film ‘Passengers’ with several members of its crew awoken when the ship hits a storm. The crew comprised of couples are hit by tragedy when the Captain dies during the accident and his now widowed wife Katherine Waterston,  alone in her grief, is set up to be the new Ellen Ripley. Having repaired the ship the crew detect a signal from a nearby planer that they have somehow missed and their new Captain Billy Crudup makes the decision to land there, find out who the signal is from and even populate the place rather than the intended planet which is a 7 years flight away.

As might be expected, when a landing party and an impending storm disrupt their communications with the main ship things go wrong. Very wrong.  But this is also where the crew meet David the scheming decapitated synthetic from Prometheus who now has a body but without Noomi Rapace at his side. It’s David who holds all the answers and it’s him who knows about the genesis of the aliens with some new incarnations of the life form which emerge from their hosts in spectacular and unexpected style and are as brutal and savage as might be expected. It’s this which fans were crying out for in Prometheus and Alien Covenant makes up for with some thrilling sequences  accompanied by an excellent score by composer Jed Kurzel (brother of director Justin) using both music from the original film as well as  new elements which make many of the alien set pieces even more intense. The aliens return in different incarnations including a huge featureless one which snuffles away like a horse and we even get some point of view shots which are markedly different from those in Alien 3 and though there is CGI here there also seems to be a decent use of partial effects too in some very gloopy plasma drenched moments

Ridley Scott brings his expected visuals which are more in keeping with the 1979 classic with its dark brooding ship interiors and stunning sets. But again this is really Michael Fassbender’s film turning in two performances of the same character of David / Walter, albeit the normally excellent scripting of John Logan ( Skyfall , Gladiator) seems to slip in an unintentionally hilarious line in a technically incredible sequence where Fassbender’s David teaches Fassbender’s Walter to play a flute telling his alter ego, ‘I’ll do the fingering!’ but Logan, who co writes here, uses important literary references none more so than that of Ozymandias.

Those disappointed with Prometheus will find far more to enjoy here with DNA strands from the earlier better films and it delivers an unexpected ending that will take the next film in the franchise in an interesting direction in what is a superior horror thriller that fans should be far more satisfied with.