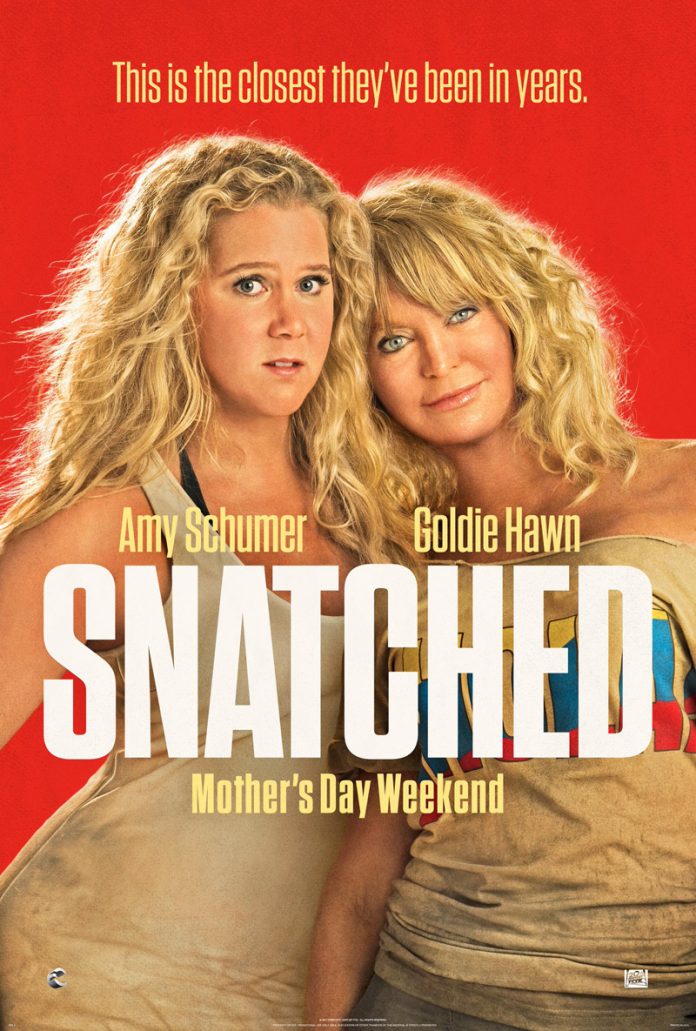 It’s been 15 years since Goldie Hawn’s last film and she makes a triumphant return to comedy films with Snatched. Actually let’s re-phrase that….Goldie Hawn makes a return to comedy films….actually let’s rephrase that……Goldie Hawn makes a return to films. Hawn plays the mother of Amy Schumer despite the film’s poster which appears to have been photo-shopped to within an inch of its life to give the impression that she plays her sister. In fact the film even shoe horns in a scene where we browse through a photo album of Hawn in her younger days almost as if to say, ‘Hey Goldie, you’ve hardly changed a bit!’

Here Schumer plays Emily Middleton, recently fired from her job and dumped by her boyfriend leaving her with a non-refundable ticket for a holiday in Ecuador and rather than waste it she persuades her divorced mother to begrudgingly join her. It’s all very Amy Schumer with some half decent jokes for the first half hour or so but when Schumer is befriended by a handsome young man at the bar who has a hand in their kidnapping by some villainous gang leader who somewhat hypocritically tells them that he hates tourists who stay within the confines of their hotel never venturing out to see the real country only for them to be kidnapped by him. The pair of them manage to escape very easily and from there the film follows their efforts to get through the jungle to safety.

Un like Amy Schumer’s first film ‘Trainwreck’ which she wrote herself this has been penned by Katie Dippold whose recent film credentials have been a little chequered because whilst she wrote ‘The Heat’ she also wrote last year’s ‘Ghostbusters’ reboot and ‘Snatched’ is a step in the wrong direction comedy wise and it’s a pity that Schumer didn’t at least co-write it and put more of her jokes and one liners in here as there’s a lot here that needs sharpening up. Though there are some funny lines the increasingly laugh out loud moments are those between Ike Barinhotlz as Hawn’s son, Jeffery, who looks like Stephen King with a mother complex, and his efforts to get a US embassy employee to assist his mother and sister.  They’re not the only side characters who are more enjoyable as Wanda Sykes and Joan Cusack play a couple, as a poorly hinted and ultimately pointless interracial same sex pair, who assist them at points throughout the film. It was clearly easy money for Cusack who is mute throughout but its a shame that she is again reduced to the sidelines when she’s proved in film like Grosse Point Blank , High Fidelity, Runaway Bride and obviously as Jessie in the Toy Story franchise what a gifted comic actress she is and is wasted here.

On top of that the films plot, thin as it is, peters out extremely quickly by the end. The uneven script, though an action comedy, can’t help making cack handed points about mother and daughter relationship and by the end in what is the most unintentionally laugh out loud moment of all is when Hawn proudly watches Schumer help the local women. We say ‘help’   but what she actually does is take pots of water off female locals who presumably having walked for miles with the pots balanced on their heads to get the water before delivering it to her to pour down a well.

In fairness to Schumer she once again plays a variation on her stage stand up persona very well and it’s admirable that she is happy to let it all hang out (literally in one scene) and refuses to succumb to the body fascism of Hollywood and despite not being a size zero is happy to wear a bikini whereas Hawn seems to be in denial about her age ( just take a look at the films poster) and as Schumer points out dresses ‘like a beekeeper’. At a mercifully brief 90 minutes it does pass the time but the script would have been more on point if Schumer had written it.