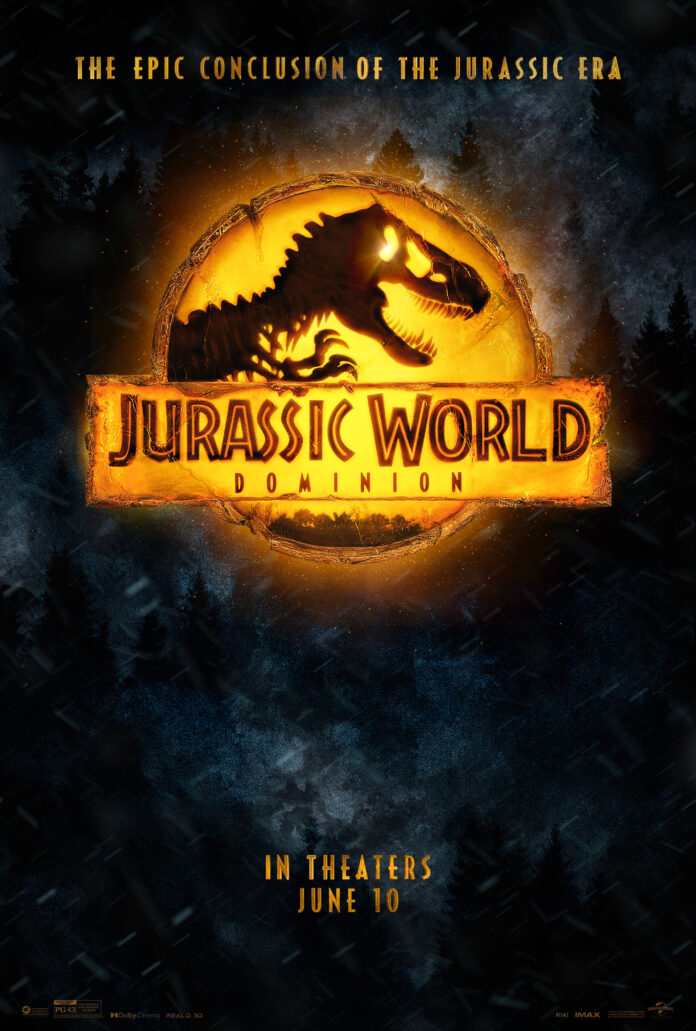 It’s been almost 30 years since we saw leathery skinned, bad tempered old dinosaurs and relics of the past on our screens starting with the House of Lords being televised but we’ve also had Jurassic Park a ground breaking jaw dropping seamless combo of CGI and practical effects and another monster hit for Spielberg. With the original trilogy having ended in 2001 it was reinvigorated in 2005 with Colin Trevorrow’s Jurassic World and again proving a box office blockbuster and now this second trilogy draws to a close with Jurassic World Dominion.

With the plodding dinosaurs at odds with modern day living roaming the Earth the likes of which has not been seen since the last Rolling Stones World Tour but now with the dinos having escaped from the auction house at the end of Fallen Kingdom, the film now finds Owen (Chris Pratt) and Claire (Bryce Dallas Howard) living a secluded life in a forest and acting as parents to their adoptive daughter Maisie (Isabella Sermon) and keeping her hidden from the outside world. Her DNA is the key to the plot here with poachers keen to find her in return for the bounty that a scientific research conglomerate BioSyn, led by a seemingly amiable CEO but acting like the leader of a cult, is offering. Maisie’s not the only one that poachers are after as Blue, Owen’s trained pet of a dinosaur from the previous films, conveniently seems to have nested nearby to Owen & Claire’s woodland hut but is also hunted or at least her baby is  that she has miraculously spawned without the need for mating – something of a dream for our editors wife (‘You’re  fired !’ – Ed).

Running alongside this is that the worlds crops are being decimated by plagues of giant locusts devouring all in their path like Gemma Collins at an all you can eat buffet and investigating this is Ellie  Sattler (Laura Dern) returning to the film from the original trilogy who ropes in Alan Grant (Sam Neill) still rooting around in dusty holes like honeymoon night for Joan Collins husband. And rounding off the original trilogy of actors Dr Ian Malcolm (Jeff Goldblum) who is now working as some sort of lecturer for BioSyn but who invites them both to the HQ having uncovered something that is covertly being researched by the company. Intended as the closing chapter in the franchise the return of Dern, Neill & Goldblum has a feel of bringing the band back together and that is part of the problem with the film with effectively five lead roles none of whom really get to lead and its Jeff Goldblum who you really want to see more of with his distinctive delivery and comical asides. But the cast of leads grows ever bigger with Maisie and significant supporting roles for Mamoudoe Athie, Campbell Scott, and probably best of all DeWanda Wise as a ballsy, no nonsense pilot.

What follows is the expected carnage as dinosaurs run amok with the expected set pieces of which probably the best is that set in a secret dinosaur market place in Malta which sees Owen and Claire being chased through the dusty town streets. Several of the films have had their iconic moments with probably the T-Rex attack in the first film still head and shoulders above anything else yet Jurassic World Dominion, despite a number of sequences,  none of them really attain that level of suspense. And of course there’s the apex predators with a couple of giganto–saurs or whatever they call them this time round that the film makers seem to have uncovered in a bid to up the ante for a more monstrous monster one of which looks like the unholy alliance of a satanic chicken and Edward Scissorhands.

At the centre of the whole franchise has always been the danger of cloning, genetics and playing with science and Jurassic World Dominion is unable to resist ending on something of an eco-message about living side by side in harmony that it’s a surprise that there’s isn’t Paul McCartney and Michael Jackson crooning ‘Ebony and Ivory’ and with end shots that wouldn’t look out of place with a David Attenborough voiceover

With a raft of characters all vying for screen time the story does become fragmented and an overlong 2hr 26 minutes that seeks for an epic feel to the films epic scope but as a potential closer to the franchise this monster movie lacks bite.