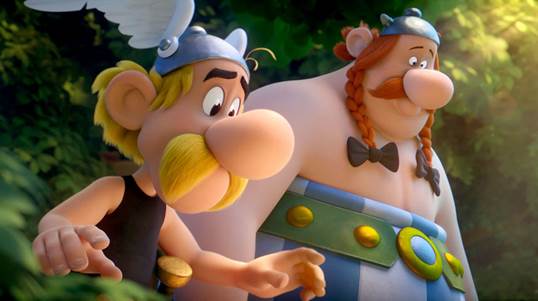 Rene Goscinny & Albert Uderzo’s comic creation Asterix appear in an enormous array of graphic novels with a number of films based on them including a couple of live action films starring Gerard Depardieu all of which are diverse and entertaining. So quite why the makers of Asterix and the Secret of the Magic Potion decided to create an all new story is anyone’s guess.

Asterix and his clan of villagers are the last undeafeated outpost in France something by the invading Julius Caesar and his army. It’s something that the village has maintained due to the potion giving them superhuman strength created by their druid Getafix but he decides that having had a fall whilst collecting ingredients he is getting too old and now is the time to pass on the secret recipe for the potion to a younger druid and with Asterix they travel across Gaul to find someone trustworthy enough to pass on the secret. However at the same time Caesar and his army are planning another attack on the village but with Getafix is on his travels supplies of the secret potion is running low.

It’s not that long ago since we had an Asterix film – Mansion of the Gods with its sly social commentary subtext but there’s none of that here but Asterix and the Secret of the Magic Potion is far better animated here. It’s other strength is that there’s no unnecessary ‘star’ actors voicing the characters something which besets many animated films these days to no obvious benefit although there is an oddly jarring 80’s hi-NRG music – Dead or Alive ‘You spin me round’ which is a little out of place. This moves along at a fair old pace with enough action to keep kids engrossed

Here’s the trailer for Asterix and the Secret of the Magic Potion…….