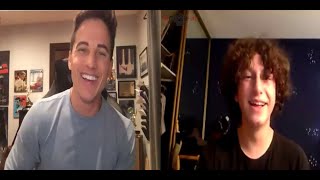 Perhaps best known for the Disney show, ‘Girl meets World’ actor August Maturo has gone on to far darker things starting with The Conjuring franchise spin off ‘The Nun’ and now stars in horror film Slapface (reviewed HERE) opposite fellow Disney alumni Mike Manning who co-stars as well as produces the film.

After the death of his mother, Lucas, a loner who lives in a rundown home with his brother Tom, regularly seeks solace in the nearby woods. With his only “friends” being a group of female bullies, he keeps to himself most of the time. But, after a strange encounter with an inhuman monster, Lucas begins to withdraw from others. When the two reach a tentative trust, a bizarre friendship is born, and Lucas is swept up in a series of primal adventures.

We spoke to them about a everything from scenes where they brutally slap each other in the face to their favourite movie monsters as well as far more personal subjects including their own experiences of bullying.