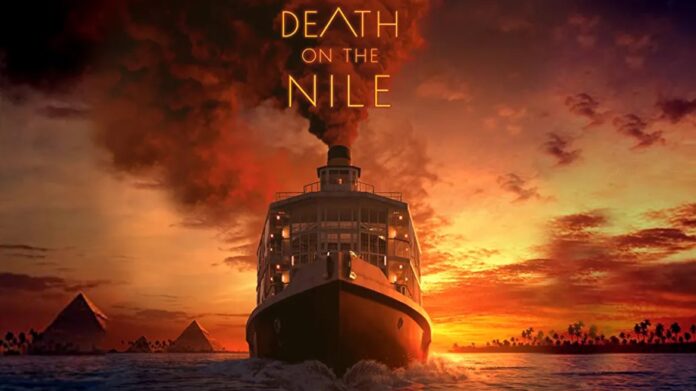 After the huge success of Murder on the Orient Express (see the cast at the World Premiere HERE) which earned $352m worldwide a follow up film was inevitable and the next Agatha Christie novel chosen to be filmed was Death on the Nile. With a wide array of exotic sets the one constant would be the boat on which the story occurred, the S.S. Karnak an the enormous luxury side-wheeler paddleboat steamer with Levantine touches and exquisite interiors. But should that boat in Death on the Nile be CGI or real?

Well it is indeed real and was constructed on Longcross’ Skidpad by designer Jim Clay and his team who researched the Thomas Cook fleet, which had three or four boats working at the time, and took elements of each and then designed their own luxury steamer.

The Nile River and the Egyptian setting are equally threatening, which only adds to the pervasive sense of terror the wedding guests already have. “We wanted to surround the story with the water, the bank, the sky, the sounds, the animals themselves, all things which have the capacity—in the twinkling of an eye—to become terrifying,” says Branagh.

Branagh is a fan of fluid, long-tracking Steadicam shots, so the boat was built in a composite way to help facilitate the production’s filming needs. While most paddle steamers have 40 or 50 cabins, the camera-friendly Karnak was designed with fewer cabins to take full advantage of the space and maximize the scope and size of the boat’s interiors. “We opted to build a couple of cabins just for the ease of shooting more intimate scenes, but essentially everything takes place on that composite boat set,” explains Clay.

Structurally, the boat was a huge challenge. It was 236 feet long, 48 feet wide and 42 feet high and weighed 225 tons. Steel fabrication began more than a year before principal photography commenced. The team manufactured the basic subframe built on a railroad track (the same one used for “Murder on the Orient Express” – reviewed HERE) and a large part of the timberwork, which took close to 30 weeks to complete.

The filmmakers originally planned to physically build the boat and float it on a lake big and wide enough to resemble the Nile, but ultimately decided to build a special structure to house the boat. This structure enabled the boat to travel in and out for different shots and allowed for the digital creation of the surrounding water. The large, modular stage, which came to be known as the “super structure,” was 380 feet by 157 feet wide.

Designed with cinematographer Haris Zambarloukos’ lighting requirements in mind, the super structure had a customized lighting grid and backlit screens lining the perimeter of the set and providing ambient sunlight to represent the Egyptian sunshine, but also the ability to quickly transition to blue screen whenever needed, all with the touch of an iPad. “The fact that we didn’t have any water surrounding the boat meant we could get to work much easier every day,” laughs Clay.

The boat’s size, scale and design were so breath taking that Branagh wanted to capture the cast’s genuine reaction to seeing it for the first time. For the scene in which the wedding party arrives at the Karnak for the first time, the production went to great lengths to reveal the boat to the actors at the exact right moment.

“We had twelve actors on a little launch in real water in real sunshine as they went to board the Karnak, and on their faces, you can see all the excitement and thrill of being on a wondrous holiday in the most extraordinary and mysterious and ancient place,” says Branagh. “When you see this cast of characters getting onto the boat, it is with a childlike joy…a Christmas morning kind of joy and wonder at the scale of it.”

A second unit spent three weeks shooting plates up and down Egypt’s Nile River, as well as at the pyramids and the Sphinx with VFX supervisor George Murphy at the helm, where he used a special camera rig he designed that is comprised of 15 cameras in a 360 bracket.