70 million people a year are displaced from their homes and 18,000 a year die fleeing. It’s an astonishing fact which is invariably overlooked by the press more concerned by the pollution caused by the plastic bottles strapped together to form a migrants makeshift raft rather than the migrants themselves presumably because unlike the plastic bottles they are biodegradable. It’s this that The Flood attempts to counter with a film based on true stories gathered from research by writer Helen Kingston.

It’s Haile (Ivanno  Jeremiah) who’s discovered by police in the back of a lorry or rather it’s Haile who leaps out of the back brandishing a knife at them before he is arrested. The story hits the headlines as he attempts to claim asylum and it’s left to a hard line immigration officer Wendy (Lena Headey- ‘Fighting with my Family‘) with a reputation for declining applications who’s given the case by her boss Philip (Iain Glen) under pressure from the Home Office to get Haile booted back to where he’s from. 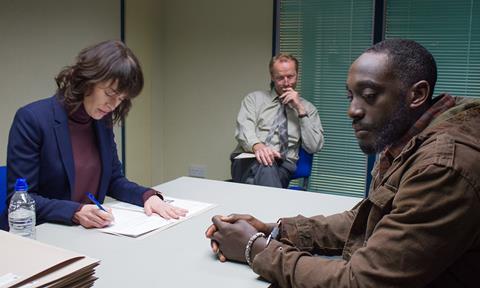 The Flood essentially is a two hander set predominantly in an interview room as he is grilled by Wendy about his origin story told in flashback and like all stories that hit the headlines there are two sides. Not everything is at it seems despite him being a soldier in Eritrea it’s something he’s ill at ease with as seen when he has to execute a prisoner and this carries through to just why he leapt out of the lorry with a knife that turns out to be an act of self sacrifice. It’s the same for Wendy because as hard as she appears she also has a story – divorced and missing her daughter she resorts for comfort in vodka disguised in a water bottle that she slugs from when in work. Both hers and Haile’s world’s are falling apart as they run from their demons.

So throughout The Flood it’s keen to present the immigrants in a positive light, Haile is sympathetic throughout, a woman he befriends is made empathetic as she is pregnant which for the audience is there to humanizes her rather than being seen as an economic migrant. At least it doesn’t present them as wannabe terrorists because as recent atrocities have shown our terrorists are homegrown provisional driving licence holders with enough money for a car rental rather than having crossed the Mediterranean clutching on to a inflatable beachball  fighting off sharks with a Vileda mop.  But despite having been taken from real life stories what The Flood never addresses is just why, when they have travelled via Greece, Italy and France, do they want to come to the UK? Both Lena Headey and Arsher Ali especially are good in their roles but The Flood will divide audiences because many will have their own view of immigrants which despite the film’s best intentions will not persuade those opposed to immigration.

I Wanna Dance With Somebody – REVIEW