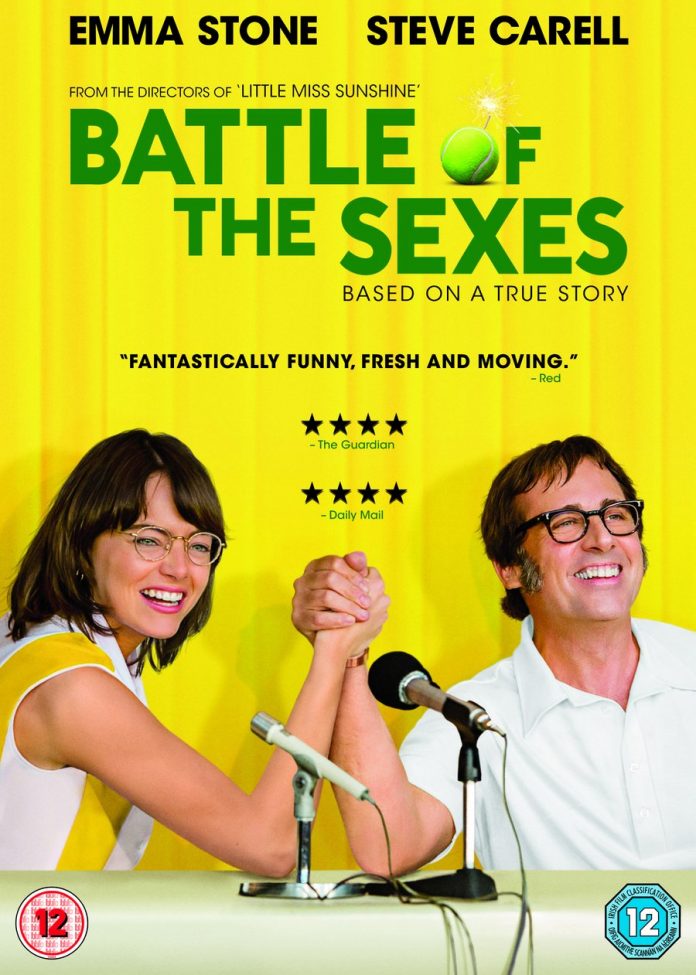 With the rise of #MeToo and #TimesUp the release of Battle of the Sexes was prescient. The 1973 tennis match between Billie Jean King and Bobby Riggs was regarded as a pivotal moment in sport  with women barely scraping a living whilst the men were being paid up to eight times as much. It irritated King greatly but at the same time Bobby Riggs who was 55 years old  at the time but in his day had won singles, doubles and mixed titles all in the same year but was now eking a living on the seniors circuit. Ever the showman and self promoter he hatched the idea of a battle of the sexes against King who was the leading female tennis player at the time

It was too good an opportunity for her to turn down seeing it as a chance to earn equal winnings for women. Both went for it. Riggs revelled in the showboating it allowed him and ramped up publicity to the max and the public lapped it up. What neither the public or Riggs knew was that King was battling with her own sexuality and despite being married she began a lesbian relationship with her hairdresser Marilyn Barnett

With Emma Stone and Steve Carell cast respectively as King and Riggs both are excellent in the roles looking uncannily identical to the real life players and both rightfully enjoyed Golden Globe nominations but were overlooked for Oscar noms.

Battle of the Sexes Is a compelling film being a love story, a sports story yet also political too and it’s theme of equality is as relevant today as it was back in 1973. There’s a cast of uniformly good performances here with Andrea Riseborough turning in yet another great performance as Marilyn, the usual irritating Sarah Silverman is well cast as King’s manager, the fearsome Gladys Heldman and Bill Pullman as the oily President of the US Tennis Association who goes out of his way to block the advancement of women in the sport.

Included on the disc is the featurette Reigniting the Rivalry which is a detailed insight into the background running up to the match. There’s also behind the scenes footage with cast and crew with shots of the stadium relying on green screen technology to generate thecrowds who would later be digitally inserted. In fact it’s a odd little extra called Bille Jean’s Grand Entrance which is not an innuendo led clip but footage of Emma Stone as King being carried into the stadium on a bed with her handling a camera herself to shoot POV footage. It’s a bit of a curio and adds nothing apart from the novelty factor. Far better is ‘Billie Jean King : In her Words’ where she talks about the struggle to establish women in the sport and to be paid properly. In many ways this is inspirational in how hard she fought to achieve rights for women in the sport which players like the Williams sisters are now reaping in tournament winnings. The disc also has a behind the scenes  stills gallery with some pretty run of the mill shots.

Directors Valerie Faris & Jonathan Dayton’s film oddly underperformed on its theatrical release which is surprising as it came out around the time the Harvey Weinstein scandal broke. Though the disc lacks a commentary track it’s still a worthwhile and relevant  film which is well worth a watch even if you do know the outcome of the game.

*****FIVE FASCINATING FACTS ABOUT BATTLE OF THE SEXES*****