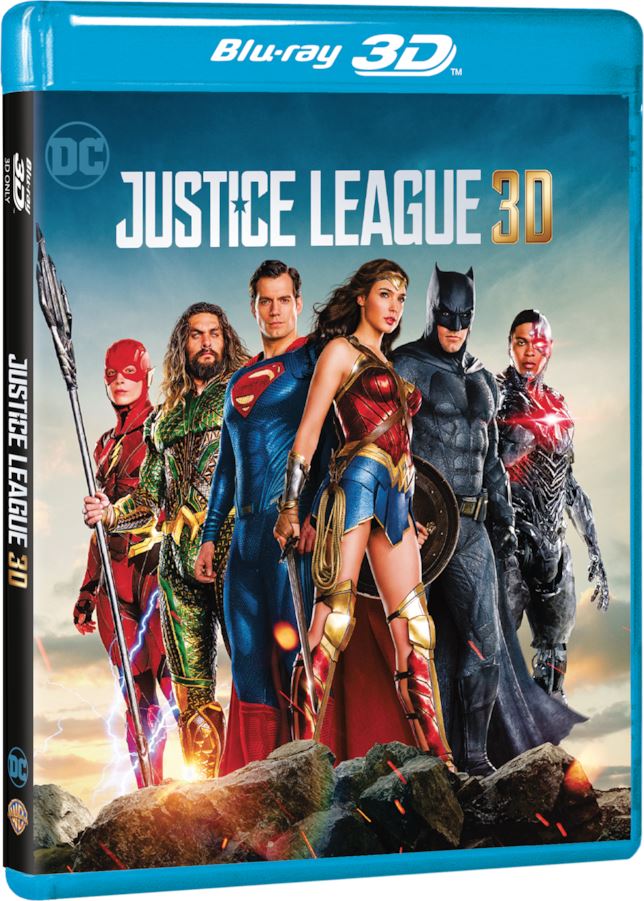 There was much expectation for Justice League both by fans and especially the studio. Batman v Superman: Dawn of Justice  had made $873m at the box office – impressive if it were not for the fact the iconic superheroes of Marvel  were making in excess of $1billion.  But the ending of Dawn of Justice with regard to Superman left questions for Justice League to answer.

Justice League, the DC superhero mash up, would again be directed by Zack Snyder who had drawn much vilification from the impossible to please fanboys and its well known that due to a family tragedy Snyder left the film some way into the shoot with the reins to be taken up by Joss Whedon who had steered Avengers to global domination.  Whedon’s arrival bought about a much needed lightness after the unrelenting darkness of BvS. Reviews were generally mixed and ultimately the film earned only $657m but the disc gives another chance for reappraisal and like all blockbusters that initially disappoint a fresh viewing without the weight of expectation gives a chance for perhaps a more balanced view.

Gal Gadot’s Wonder Woman & Jason Momoa’s Aquaman come out best with Batman still a moody bugger, Superman as staid as ever (though there’s no mention of moustache-gate), The Flash slightly irksome with his quips and Cyborg, an underwritten truculent teenager though hardly surprising when your Dad’s experiments turns you into half robot.

The set pieces are as spectacular as might be expected although CGI rules each scenes and there are several moments which don’t sit easily with a 12 certificate film notably Superman headbutting Wonder Woman into the ground and an earlier scene where a villain attempts to machine gun a group of cowering children on a days visit to London’s High Court (thankfully it’s Wonder Woman again who saves them).

As a disc there’s plenty on here to satisfy fans which starts with the Return of Superman with a couple of very brief bonus scenes that would add little to the film except you do get a glimpse of Superman’s black costume. Whist Steppenwolf the Conqueror is a brief featurette with actor Ciarán Hinds revealing the story behind mankind’s ancient enemy.  It really is brief too lasting only a couple of minutes though perhaps as the character was not an entirely  satisfying and less than memorable villain its hardly surprising that it is only a couple of minutes long.

A behind the scenes look at Revisiting the Amazons,  Wonder Woman’s Rescue,  Heroes Park and The Tunnel Battle gives an interesting insight into how each of these scenes were shot with a comparison of footage to pre-visualization. It comes as little surprise just how much of this was shot against green screen something which Snyder has used extensively ever since 300.  It does however include one of the funniest moments when a female stunt co-ordinator from Liverpool explains how the stunts were rehearsed but at one point her scouse accent is so heavy that subtitles are included. Suit Up: The Look of the League has Costume Designer Michael Wilkinson explain the innovation and artistry that goes into creating the costumes of DC’s and will equally interest and infuriate fans with a nerdish knowledge of the evolution of the superheros costumes.

Rounding out the extras are Road to Justice an intriguing history of the Justice League which offers an insight into how the group developed in the comics through the decades where major changes began in the 80’s where it had become convoluted with new characters which necessitated a return to the ‘Big 7’ and the highly regarded relaunch in the 90’s by writer Grant Morrison and rejigged again in 2010. Heart of Justice is another brief look behind the scenes and far better is Technology of the Justice League which looks at the gizmos, gadgets and vehicles of Batman.

But again what is glaringly absent from all of this is Zack Snyder who, though he’s seen directing scenes, never  does any formal interviews and what we really want to hear is a directors commentary but perhaps with him leaving the production this was never likely to happen and rumours are now surfacing about him actually having been fired. If that is the case then any evidence of Joss Whedon being involved is nowhere to be seen on the extras.

The rumours of a ‘directors cut’ persist and quite whether this will ever come to light (or even exist) remains to be seen but at two hours this is the right length and is a decent enough addition to the DC universe and certainly a notch up from the dour bleakness of Batman v Superman  with the blu ray version rich in colour tone albeit mostly being black……..and yes that end credit scene sets up an interesting follow up film in the DC Universe.

JUSTICE LEAGUE is out now on Digital Download and arrives onto 4K ULTRA HD Blu-ray™, Blu-ray™ 3D, Blu-ray™ and DVD March 26. A Steelbook is also available exclusively with HMV.