Blockers is the latest in a very very long line of ‘teens wanting to lose their virginity’ films except here it’s not the frat boys looking for a lay but the girls on the lookout for love. The three girls make a pact that on Prom Night they will do the deed with their boyfriends

But it’s only when their parents find out their plans that they become intent on preventing their little angels being deflowered on Prom Night and frankly after catching sight of their boyfriends you can hardly blame them.  One looks like a beach ball, painted in glue and rolled in ginger pubic hair, another has a man bun that looks as ludicrous now as it will do in photographs ten years down the line and the third is a vacuous Himbo with the personality of a plate. So is this a sensitive coming of age drama? Perhaps knowing that Seth Rogen is one of six (yes, six!) writers who also produces should give you the answer.

With the girls having been firm friends from their first day at school it’s a truism that their parents feel obliged to be friends too . So we have John Cena as Mitchell, the over protective father, Leslie Mann as Lisa the divorced and lonely mother who sees her daughter as more of a friend desperate  for her not to leave home for college, and Ike Barinholtz as Hunter the divorced, debauched  and frequently absent liberal father. So as the girls set off on Prom Night the parents set off in preventative pursuit and what follows is a series of slapstick set pieces  with Rogen’s fingerprints all over them with some notably gross out jokes (a beer butt chugging scene) and various sex gags that involve the parents as much as anyone else with bare backsides squished against windows, male members slapped in men’s mugs and sagging scrotums squished. Yet it’s not the filth fest you might expect and in its way is almost sweet with some valid remarks about equality for the girls when boys would be seen as studs if they behaved the same. #TimesUp indeed. 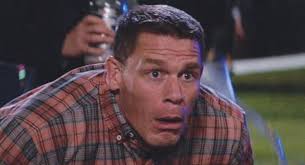 Despite Kathryn Newton being the lead daughter Julie  who sets the sex pact in motion her role is the most bland and its Geraldine Viswanathan as her friend Kayla who is the standout ladette of a daughter with the appropriately named Gideon Adlon as the sexually confused daughter Sam who fares better. But it’s Ike Barinholtz as the father Hunter who is best of all because until he joins the film it’s pretty flat but the screen lights up with his rowdy potty mouthed fratboy father role and the only one who’s liberal in outlook to just let nature takes its course and prevent the other two parents being boyfriends blockers to their two daughters.  As seems to be US screenwriting law there is almost inevitably  a ‘message’ for both the parents and daughters to learn which is nothing new but in many ways Blockers is a sweeter natured version of early eighties film like Porky’s and Meatballs which set the tone .