With a great credit sequence that firmly sets the 80’s tone the film moves through to 1987 where Javed (Viveik Kaira) lives with his family in their suburban Luton home which he feels inhibits his dream to become a writer. Ruefully single and with his best friend Matt and girlfriend just a few doors from him as a constant reminder of his single status he goes to college where he befriends another Asian lad Roops who’s mad keen on Springsteen and introduces him to the joys of the denim clad rocker and his music and lyrics. 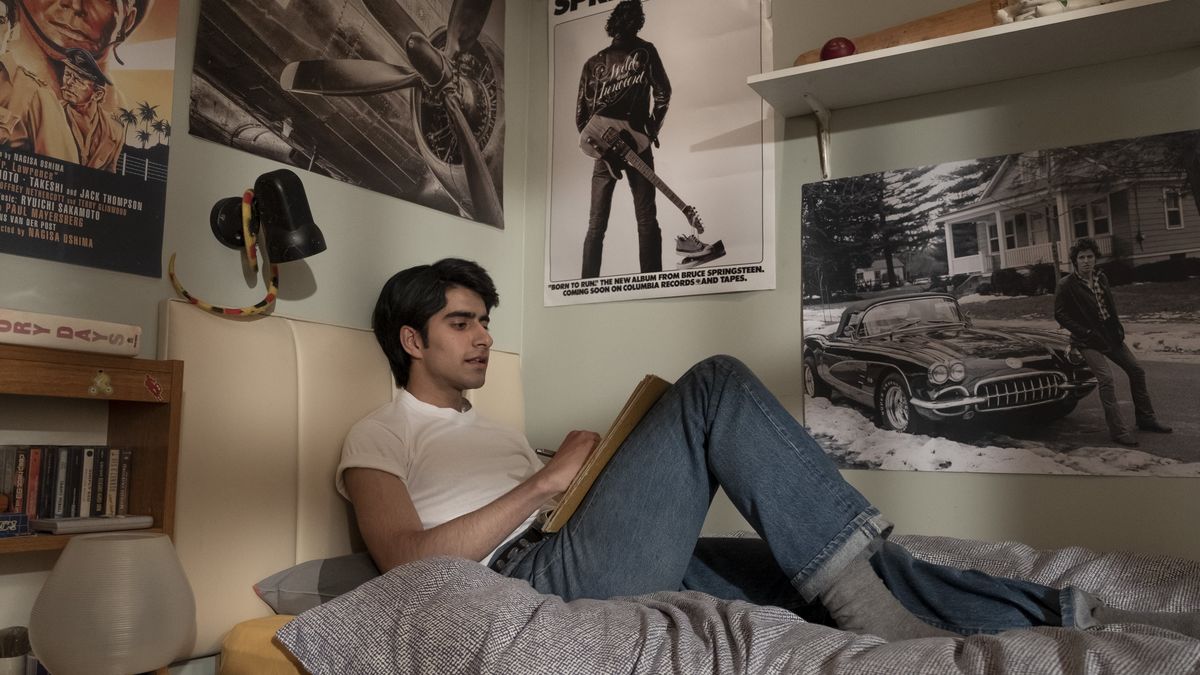 Directed by Gurinder Chadha (Viceroy’s House)this is a well rounded drama set against a background of rising racism and a strident National Front unafraid to verbally abuse asian communities in Thatcher’s Britain of the 80’s. Based the true story of Sarfraz Manzoor the film is ‘inspired’ by the music and lyrics of Springsteen though with the lyric ‘In the dumps with the mumps as the adolescent pumps his way into his hat’  it makes you wonder just what Javed has been doing in his bedroom. But  with Javed yearning to be a writer and break free from his domineering father it’s perhaps would have been better to call the film ‘Born to Run’, which includes the lyric ‘we gotta get out while we’re young’

As with all of Chadha’s films the clash of culture is at the centre of this and Javed’s father proud father emasculated by redundancy and can’t provide for his family yet forces his wife to take ever more sewing work to help provide for the family and doesn’t want his son to write as he needs him to get a job and start bringing in a wage. It all comes to a head with Javed’s tutor seeing his passion to write and submitting his work for a competition which wins a cash prize which he invests in Springsteen gig tickets whilst trying to keep it secret from his Dad.

Chadha has assembled a great little cast with Kaira great in his role  and Kulvinder Ghir best known for his roles in TV’s ‘Goodness Gracious Me’ equally good as his father in what at times feels like a more developed version of his Indian Father character from that series. There’s  reliably good support as ever from Hayley Attwell and Sally Phillips and a cameo appearance from comedian now actor Marcus Brigstock as channeling John Cleese to great effect in an awkward meal as the father of a girlfriend and professional Welshman Rob Brydon demonstrates his mullet wig wearing skills as his the market stall Springsteen warbling  dad of his fried Matt – at least for once he’s not trotting out his Tom Jones impression.

Brilliantly capturing the 80’s with its production design that ranges from one pound notes to Absolute Beginners posters to the cassette playing Walkman as well as a fad for double denim and Flock of Seagulls haircuts (never a good look even then).  Blinded by the Light is overlong but ultimately and rightly uplifting showing that music transcends cultural differences and can breach divides.

Here’s the Blinded by the Light trailer……..