‘Guns don’t kill people, rappers do’, claimed welsh comedy rappers Goldie Lookin’ Chain but Blue Story in fairness goes behind the almost daily stories of youth deaths where the victim are almost without exception allegedly aspiring rappers or sometimes footballers about to start for a Premiereship’s teams first 11 when the truth is they’re invariably drug dealing members of criminal gangs. Blue Story is a film written and directed by Andrew Onwubolu aka Rapman who we ran a piece about HERE. Himself no stranger to the mean streets of London this is his feature film debut about two friends Timmy (who fans of South Park might smirk at the mention of the name) and Marco. Played by Stephen Odubola and Michael Ward both are convincing in the roles as kids dragged into opposing gangs and their culture. Set in Lewisham Odubola is especially good as a humble and essentially decent  guy. Inevitably the gangs take umbrage over the slightest thing with turf wars and drugs playing their part and consequently it is inevitable where this is all heading. The tiresome posturing from what are ultimately kids  is all too persuasive as their beef with each other ratchets up. 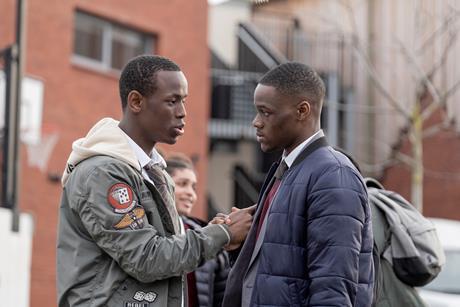 Claims that grime music is responsible for deaths in the black youth community might seem risible and frankly if that were any truth in that then the conservative government would probably be funding it but director Onwubolu rapping  as a Greek chorus throughout the film offers a unique commentary on what’s happening . Blue Story builds up through various gun related incidents and that is one of the problems with the film with regard to realism because as it is knife crime that is an almost daily occurrence as tight regulation of firearms makes getting hold of one not at all easy especially for a bunch of teenage wannabe gangsters.  Equally as well intentioned as the film undoubtedly is Blue Story doesn’t offer up any answers and perhaps the most shocking and hard hitting aspect of the film is what appears to be real life TV footage of incidents sparking up from nothing and ending in tragedy. This is far removed from Noel Clarke’s Brotherhood films and is a decent debut from Onwubolu with some unexpected turns in the story and assured direction which promises well for whatever he might direct next.