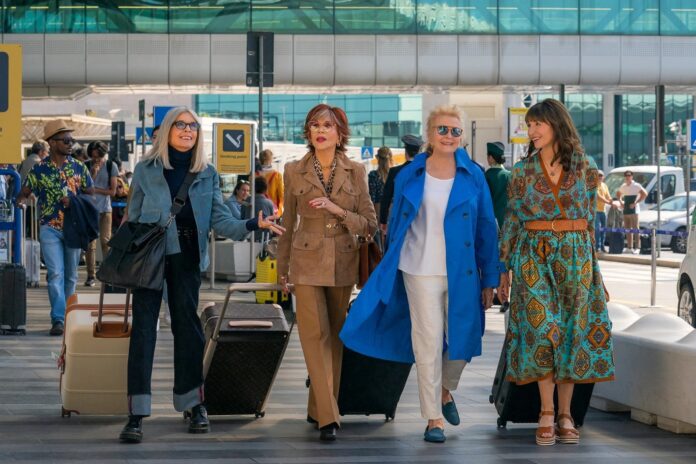 Back in 2018 we had Book Club a film that saw four lifelong friends have their lives forever changed after reading 50 Shades of Grey in their monthly book club – the book’s author E.L. James made a fleeting cameo in the film. It was a huge success earning over a $100m so a sequel was always going to be on the cards (as reported HERE)  so long as the cast list of senior Hollywood stars stayed alive. Well they have and now we have Book Club The Next Chapter trailer.

The highly anticipated sequel follows our four best friends as they take their book club to Italy for the fun girls trip they never had. When things go off the rails and secrets are revealed, their relaxing vacation turns into a once-in-a-lifetime cross-country adventure.

Here’s our review of another tale of frisky pensioners, ‘Rimini’

There’s a really great cast of old school stars in the film including Diane Keaton, Jane Fonda, Candice Bergen (who have all dated aging lothario Warren Beatty) and Mary Steenburgen, Craig T. Nelson, Giancarlo Giannini, with Andy Garcia, and Don Johnson. Proper stars with pedigree as opposed to the what is becoming something on the rise that of casting ‘influencers’ or as we like to call them, ‘the unemployable’.  The film is once again directed by Bill Holderman who also co-wrote the script. From the look of the trailer it looks like more perky pensioner action with Jane Fonda who seems to somehow get younger as time goes on, being particularly frisky if this is anything to go by

Here’s the Book Club – The Next Chapter trailer……