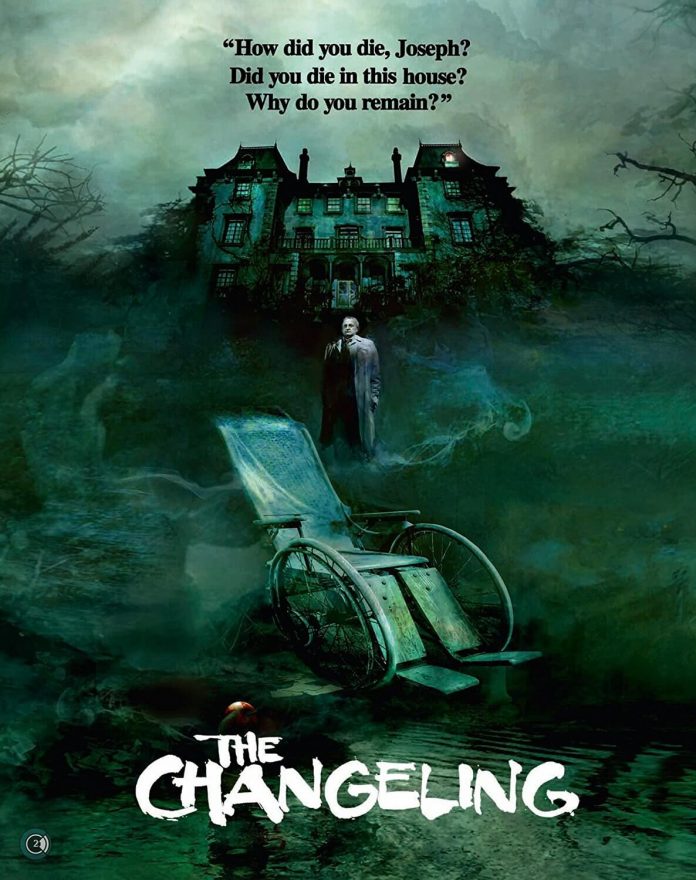 Released in 1980 The Changeling came on the tail end of the great 70’s horror movies and as a haunted house film it had the misfortune to follow the immense box office success of The Amityville Horror.  Whereas Amityville was out and out shocks it was purportedly a true story and The Changeling was another film that was based on a true story. Originally to be called ‘The House on Cheeseman Park’ the film centres on a respected composer played by George C Scott widowed when his wife and only daughter are killed in a tragic road accident he eventually comes to term with his grief and attempts to rebuild his life by moving into a huge house to continue his work. Starting with unexplained noises the house slowly starts to haunt Scott with a number of increasingly creepy occurrences that prompts him to investigate the history of the house and in the process uncovers a terrible secret. In that way it follows the template of other haunted house films but the story that this is based on is almost too incredible and is covered in a great little featurette on the disc, ‘The Haunting true story of The Changeling’ which in turn explains the title of the film itself. In that respect it’s a documentary that shouldn’t be watched until you’ve seen the film as it will spoil the story.  It’s presented by Phil Goodstein, a respected Denver historian who talks in great detail about the history of the house featured on the film and it is truly fascinating.

The Changeling was set to be directed first by Tony Richardson and then Donald Camell before Peter Medak took on the project. Richardson was an odd choice having made a number of highly regraded kitchen sink dramas including, ‘Look Back in Anger’ and ‘A Taste of Honey’ as well as the sublime ‘Tom Jones’ and nothing in his cannon really made him an obvious choice for a horror film. Cammell’s career had been sporadic having directed his debut film, the brilliantly disturbing ‘Performance’ with Mick Jagger, and not making a film until seven years later with ‘Demon Seed’ before then making videos for U2. His take on the film would have been interesting but it was probably too Hollywood for him.

Medak on the other hand had made a number of TV shows most notably ‘The Rocking Horse Winner’ about a boy who could predict horse race winners whilst riding his toy rocking horse. It was a film that had some very unsettling moments in it and Medak would use the ability to portray the mundane as frightening when he shot The Changeling none more so than the simple use of a child’s ball which would crop up throughout the film.

George C Scott was an Oscar winning heavyweight having won for his turn in ‘Patton’ but never really following up with anything worthy of his talents apart from his lead turn in Paul Schrader’s excellent but underrated 1979 film, ‘Hardcore’.  Horror had not been a genre he had really dabbled in but if Gregory Peck could appear in ‘The Omen’ with its huge box office and ‘The Amityville Horror’ proved there was a market for spookiness then The Changeling, albeit not bloody like The Omen, should still hold an appeal for audiences wanting to be spooked.

Today The Changeling has been largely forgotten which is a shame because whilst it’s not as sensational as the 70’s horror classics its old school scares still stand the test of time and no less than Martin Scorsese himself has cited it as being an influence. The disc has had a 4K scan and restoration and includes an insightful commentary from director Peter Medak and producer Joel Michaels.  In addition the disc has several featurettes all of which are intriguing with perhaps the best being one with art director Reuben Freed talking about the work of the late Trevor Williams whose production design on the film is impressive. There’s also a featurette on the films score with music arranger Kenneth Wannberg and an unusual feature called ‘The Psychotronic Tourist’ where several of the locations are revisited by film industry fans of the film. The Changeling had been mostly shot in Canada with some exteriors in New York and most of the locations have changed little since the film was shot in 1979. The disc also includes the usual trailer but also includes a feature, ‘Man of Horror – Mick Garris’ who is perfectly charming writer / director behind such films as ‘Critters 2’ , ‘Psycho 4 : The Beginning’ and the TV version of ‘The Shining’. He‘s hardly held in the same regard as say George Romero, Tobe Hooper or Wes Craven so it’s not really apparent as to why he has a feature to himself here albeit he talks about his admiration for the film but in fairness it’s difficult to concentrate on what he’s saying when he looks like Laura Dern’s older less fortunate sister.

The Changeling is a decent little chiller with an intriguing story that’s is inspired by the true story of the real life house in Denver and has enough decent creepy moments to make it ideal for Halloween.