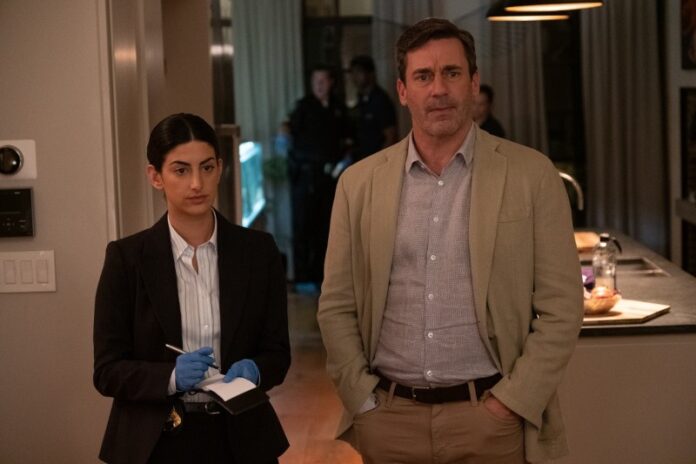 Following in a role made famous by Chevy Chase are big shoes to fill – if not just because the comedian is 6 feet 4 tall – but Jon Hamm takes on the challenge with Confess, Fletch playing the character of the sardonic bare foot investigative reporter. Though there were only ever two Fletch films made (the last being in 1989) the franchise has had numerous attempts to relaunch or reboot it and with Chase knocking on 80 years old it was highly unlikely that he would return to his knockabout version. So its falls to Jon Hamm who might not be the obvious choice but his back catalogue shows he has the comedic chops for the role.

Jon Hamm stars as an investigator in the Clint Eastwood film, ‘Richard Jewell’

Confess Fletch is based on the second novel in the series of books adapted for film that sees Fletch aka Irwin Fletcher, retuning from Italy where he has been helping to locate a missing painting for his new found girlfriend Angela (Lorenza Izzo) to his Boston townhouse where he finds himself prime suspect when he wakes up to find a dead body in the hallway. Investigated by a police inspector and tired father to a new born (stand-up comedian Roy Wood Jr) he has to prove his innocence whilst locating Angela’s valuable painting whilst all manner of chaos ensues most of which instigated by Fletch himself.

Along the way Hamm encounters an array of characters played by comic flair by Annie Mumolo, John Slattery and a terrific Marcia Gay Harden and Lucy Punch (her attempt at explaining what ‘bespoke’ means is a highlight) with both being adept scene stealers. Chevy Chase’s Fletch thrived on daft disguises in a sort of nod to the later Pink Panther films but Hamm’s version is a little more grounded Bemused at the disarray and carnage he sees and often creates he saunters through this to great effect and writer-director Greg Mottola whose previous films includes ‘Superbad’ & Simon Pegg starrer, ‘Paul’ has put together an enjoyable romp of a much missed character.