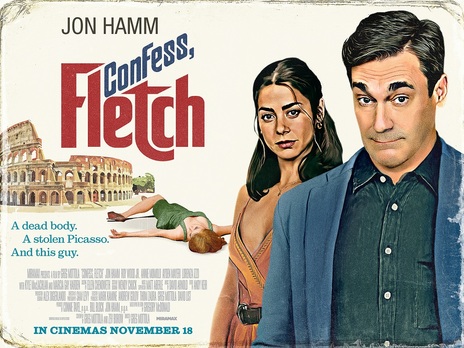 It was comedian Chevy Chase who first originated the Fletch character on the big screen with 1985’s Fletch followed by ‘Fletch Lives’ in 1989 adapted from the Gregory McDonald authored books about the newspaper reporter.  But with a franchise never really taking off and it being over thirty years since the last film has probably been forgotten we now have something of a reboot with the release of the Confess Fletch trailer with Jon Hamm taking over the title role.

Jon Hamm stars as the roguishly charming and endlessly troublesome Fletch, who becomes the prime suspect in a murder case while searching for a stolen art collection. The only way to prove his innocence? Find out which of the long list of suspects is the culprit—from the eccentric art dealer and a missing playboy to a crazy neighbour and Fletch’s Italian girlfriend. Crime, in fact, has never been this disorganised.

It’s something of a departure for Hamm and we are keen to see what he’s like in the role and he is given support from Roy Wood Jr., Annie Mumolo, Ayden Mayeri, Lorenza Izzo, along with Kyle MacLachlan and Marcia Gay Harden.