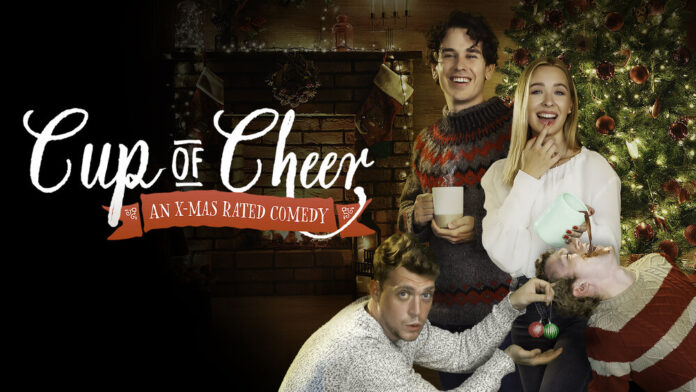 Now as curmudgeonly and cynical as we know we can be we do love Christmas. Who doesn’t like bellowing out carols about The Holly & the Ivy (our Editor doesn’t as he ‘s been banned from both those pubs) and chestnuts roasting on an open fire (he also has a habit of standing too close to log fires). And with the season upon us it’s time for a spate of Christmas movies which invariably centre around a love story where all ends happily ever after whereas the reality is an increasingly bitter day fuelled by absinthe laced eggnog and an increasingly fractious Christmas dinner ending with the police turning up en masse carting off everyone in their Christmas jumpers. But as much as we love, ‘It’s a Wonderful Life’ and ‘Love, Actually’ there are a whole host of films seemingly taking Hallmark cards as a script template so it’s a wonder that it has taken so long for a film to send them up. Cup of Cheer is that film.

Co-written and directed by Jake Horowitz, Cup of Cheer has Mary (Storm Steenson) a journalist from the big city sent to her home town by her Editor with a Christmas Eve deadline to file a story of seasonal cheer. With a warning not to fall in love you know exactly what’s going to happen when she bumps into Chris Mis (Alexander Oliver) owner of a local cocoa shop, the Cup of Cheer, but on the verge of going bust on Christmas Eve. So unless he can raise enough money to see off business man Mai Ex (Shawn Vincent) who suffers from appalling bowel problems and is the ex-boyfriend of Mary, there’s little hope of the cafe and its staff ending up on furlough.

With such character names as Chris Mis & Mai Ex you can see the level of humour that Cup of Cheer aims and much of the dialogue has the characters knowingly stating exposition and sending up the tropes of Christmas movies. Unfortunately as funny as this initially is it maintains the same joke for the next 90 minutes and it quickly becomes wearing. An extraneous character Authuh (Jacob Hogan), a  sort of 19th century English toff serves no real purpose and simply irritates and the villain and his ongoing bowel issues is at best puerile with the joke getting no funnier as the story progresses. Cup of Cheer has rightly identified a genre ripe for sending up but the script would have greatly benefitted from a team of comedy writers and soon outstays its welcome with the Ho Ho Ho’s drying up early on. The film is not without its charm and both leads commit to their roles with several enjoyably daft jokes that are befitting of the legendary Naked Gun TV show but ultimately this is a half hour TV show stretched out to breaking point.

Here’s the Cup of Cheer trailer…….