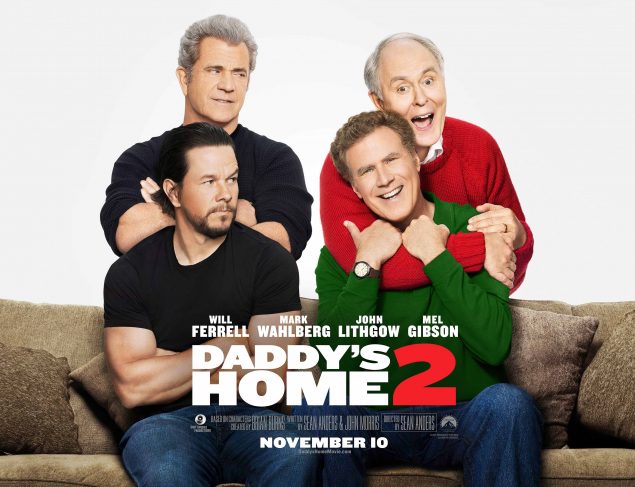 Will Ferrell’s not had a particularly good run of films of late.  ‘The House’ bombed so badly it didn’t even make back its $40m budget,  ‘Zoolander 2’ was regarded as one of the worst comedy sequels  ever made and lost even more money and both were major disappointments after the huge success of Daddy’s Home which reunited Ferrell with Mark Wahlberg as warring father/ step father. So with that success comes the obligatory sequel where Brad (Ferrell) and Dusty (Wahlberg), having settled their differences for the good of the children, decide to spend Christmas together as one big family. Rather than rehash the first film though they invite their own fathers along who prove that they are really just a chip off the old block. John Lithgow as Ferrell’s father is a simpering bundle of inane anecdotes whereas Mel Gibson as Wahlberg’s father is even more testosterone fuelled than his son lacking even the basic of parenting skills and regarding Walberg as having become a pale imitation of Ferrel and his prissiness.

Setting off to a stunning beautiful log cabin for Christmas the families, the fathers, wives/girlfriends, the kids /stepkids prepare for the countdown to Christmas with Gibson determined to stir things up.  It’s a big cast with 9 characters vying for screen time each with their own little sub plot. Sean Anders who writes as well as directs manages to juggle most of the characters equally but this is more of the same with Gibson as the antagonist and who at times appears to have a purple rinse hairdo.  What follows is a series of pratfalls and slapstick for Ferrell and inappropriate comments and actions from Gibson with Lithgow not especially involving and as seems to be the case with nearly all of these type of American comedies, there are life lessons to be learnt by all.

It’s not without its moments but nothing comes close to the originals competitive dad bedtime stories and there are moments which sit uneasily notably a sequence of one of the children with a high calibre rifle shooting turkeys, some product placement by Starbucks and Showcase cinemas and the mawkishly sentimental ending.

Unfortunately it doesn’t ever really hit the heights of the original but there’s enough goodwill from the first film that will ensure its success and an all too likely third film.