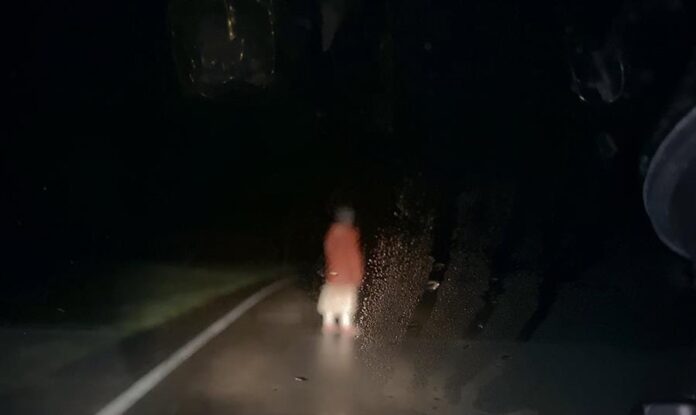 Our Editor persists in the belief that he is an excellent driver having never had an accident. That is until we point out that all his dashcam footage shows him to be the cause of hundreds (‘You’re fired!’– Ed). The Dashcam in director Rob Savage’s latest film also captures all manner of carnage. The dashcam in question here is one that provides live streaming of Annie Hardy (played conveniently enough by Annie Hardy a real life YouTuber) and her show ‘Band Car’ in which she drives around in her car improvising raps and throwing out anti-vaxxing arguments and Trump’s MAGA madness. So straight away you’re either going to love or loathe Annie and in fairness some of her moments refusing to comply with Covid regulations are amusing but equally serves to fuel that she deserves what’s coming her way.

Starting off in LA she is depressed due to the pandemic situation and Annie heads off to London during a time when we were all in lockdown yet that bin bag of albino body parts British Prime Minister was keeping the airports open for all and sundry to fly in. And so arriving in the UK she crashes her former bandmate’s house where he lives with his almost anally retentive covid complier of a girlfriend. With opposing views Annie quickly falls out of favour and quickly makes herself unwelcome with both her and her former bandmate, whose car she steals, where she gets an opportunity to earn some money doing takeaway deliveries but gets a further opportunity to earn some big money by transporting Angela who appears to be an illegal immigrant. What could go wrong? It turns out, everything.

Annie continues her live stream Band Car show as she transports Angela who clearly has something of the night about her sitting there quietly with a vacant yet disturbing stare. So what appears to be a straight forward narrative soon goes off the rails and everything, and we mean EVERYTHING, is thrown into the mix in spectacular bloody fashion. It’s not just gore, there’s poop and vomit thrown in that must surely be a bench mark for those attending any future Downing Street pandemic party.

Director Rob Savage pulled off a masterstroke with the brilliantly conceived and executed zoom based, ‘Host’ however Dashcam suffers from difficult second album syndrome. He has bought back some of his actors from Host to make fleeting cameos here but Dashcam is nearly all Annie Hardy sticking loosely to the found footage technique most obviously influenced by The Blair Witch Project as Annie often abandons the car to run off into the woods at the side of the road. Like ‘Host’ there are some very good moments here to freak out audiences and a second viewing gives audiences an opportunity to read some of the on-screen comments made by those watching the Band Cam show. But Annie Hardy is far from sympathetic and the camera is at times so animated as to be difficult to make out what is going on as the madness, and towards the end it really does get insane,  wholly justifying Annie’s cry of, ‘What the f**k is happening?’ Like Host this runs a brief 77 minutes but unlike Host doesn’t lead to a satisfactory pay off. In many ways Dashcam might have worked better as a  chapter in the V/H/S anthology films. But either way Rob Savage has proved he can put together highly effective super scary movies and on the basis of his first two feature films to date there’s much to look forward to now that he is working under the Blumhouse Pictures banner.