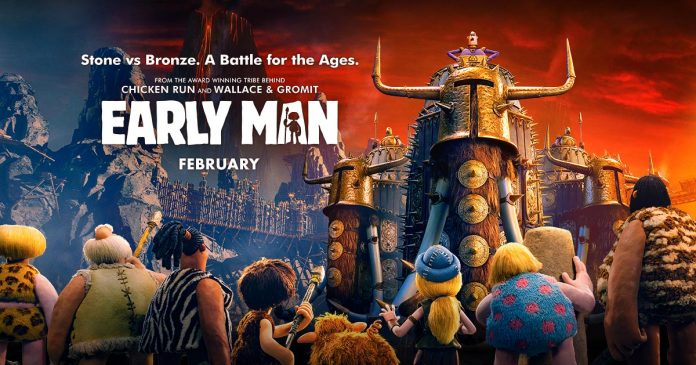 The latest episode in the Editor’s unfortunate way with words saw him go for an uncharacteristic jog in the local park only to be invited to join a mixed sex football game where he bizarrely ended up scoring a goal assisted by a female striker on his team. Getting home in a somewhat dishevelled state his wife asked him how he got on to which he replied, ‘Some women in the park asked me to play with them and I showed them how good I was with my tackle and dribbling in the box. They demonstrated what great ball control they had and I scored with one of them and shot over the goalie’s head’. The Editor is once again sleeping in the spare bedroom.

As tenuous a link as it is but it ties in with this week’s release ‘Early Man’ which, though it is set in prehistoric times, centres around the invention of football and a crucial match that our hero Dug (Eddie Redmayne) and his pet find themselves involved in. Dug is a stone age man evicted from his valley along with the rest of his tribe by a vowel mangling Frenchman Lord Nooth (Tom Hiddleston) who has found iron ore and is set on mining their land for metal. What follows is Dug and his tribe embroiled in an attempt to save their valley by playing the French at football in a deal that will let them return to their valley if they win. Problem is that they’ve forgotten how to play and win – a tradition maintained by the English football team to this very day, apart from a momentary blip in 1966, but continuing to be a national embarrassment to this day.

The film is the latest from animation genius Nick Park’s Aardman outfit and their stop motion animation is always reassuringly cosy and uniquely British in style and this is no different with each feature growing ever more technically impressive with the film even incorporating lens flare in some shots. There are some inspired moments in this notably an instant replay of moments in the match re-enacted by stick puppets. Park’s Oscar winning reputation has attracted unique vocal talent to the film including Timothy Spall, Richard Ayoade (The It Crowd), comedian  Johnny Vegas, Mark Williams (The Fast Show) and even Kayvan Novak, the man behind the myriad of voices on the FoneJacker TV series, all with immediately identifiable vocals rather than the bland vocals of many A list stars whose voices without their faces are often indistinguishable from any others. Unfortunately here many of the characters are quirky but ultimately peter out as the film goes one with the script not really expanding on their comic potential. Equally both Dug and his sidekick pet are no match in terms of endearment as Wallace & Gromit and the script has too many weak jokes is sparse on strong verbal gags something illustrated by Rob Brydon’s commentators with their string of weak puns. Even more baffling is Brydon voicing three characters with different accents yet all identifiable as him putting on a voice though as least he’s not trotting out his stock in trade impressions of Tom Jones & Michael Caine and it’s a shame that Novak is not given a chance to show just how truly versatile a performer he is with voices.

With the late Peter Sallis no longer around to voice the always great Wallace it falls on Aardman to find new appeal but regretably Early Man is a lesser entry in their cannon. It’s focus on football too would seem to limit its appeal to a young female audience despite  Maisie Williams insisting that her role as a football mad female player is a role model and quite how this will sell in America would seem to be a hard sell. Running at a brisk 88 minutes this lacks the appeal of Aardman’s best work.