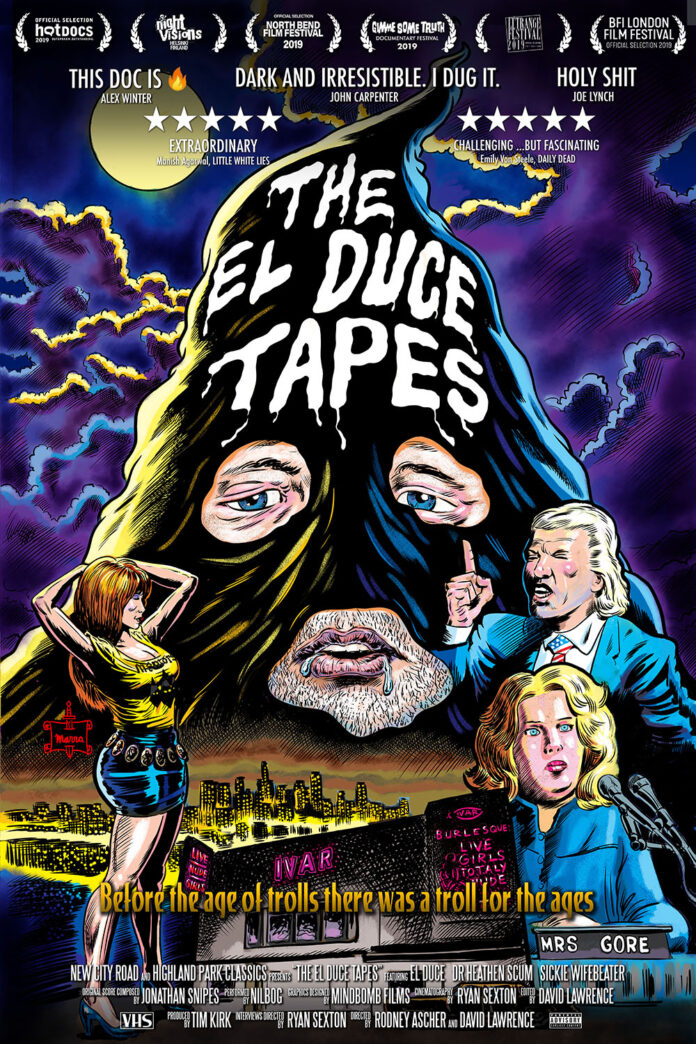 Watching a drunken, pot bellied band member stripped to the waist, wearing an executioners hood and bellowing lyrics to what he terms ‘male chauvinist rock’ is a bit like Amanda Holden performing as Lady Macbeth – no one wants to see it but you can’t take your eyes off the sheer horror once you start watching it. But that’s what you get with The El Duce Tapes a documentary from film maker Rodney Ascher who gave us ‘Room 237‘ and more recently The Nightmare. Along with Dr Heathen Scum, Sickie Wifebeater and Sneaky Spermshooter (all of whom must have had the most entertaining of christening  services) were band members of The Mentors of which El Duce was the drummer and offensive lyric writer. So offensive that the band came to notoriety when denounced at a US senate hearing, an act which served only to give them the oxygen of publicity and increase their record sales – strange that you never hear their songs at karoake.

Compiled from a heap of VHS recordings made by jobbing actor Ryan Sexton who had found El Duce collapsed in a drunken heap outside his apartment he started following the band around.  Interviewing the band his footage went behind the executioner’s hood that El Duce wore on stage along with the rest of the band. It was a mask El Duce hid behind – his real name was Eldon Wayne Hoke , one of four children to conservative parents who, right from his school days, was a troubled man which manifested itself with his band playing what he described as ‘Rape Rock’ spouting deeply misogynist lyrics whilst strippers performed onstage  – it was little wonder that the ironically named band, ‘The Mentors’ attracted so much controversy and their songs never use for the first dance at weddings.

El Duce comes across as a man out of control taking solace in his worsening alcoholism whilst others looked on enjoying the revelry that ensued and his sister, who was part of the band’s entourage, calling him ‘a real Aryan male’. It’s that self destructive streak that prompts the question as to why no one tried to help him regarding him instead as a novelty spectacle to enjoy and there’s an especially depressing moment late in the film where El Duce, almost comatose from booze,  naked from the waist down, is dragged along the floor at a house party whilst students squeal and shout at the debacle. It’s telling that El Duce admits, ‘I hate myself’.  His appeal as the out of control party animal shouting sexist lyrics and spouting homophobic comments meant that his appeal was really to insecure teenage boys. But The El Duce tapes speak for themselves without any need for a voiceover with the man rarely sober and in desperate need of help yet regarded as a novelty act by all notably appearing on an episode of  ‘The Jerry Springer Show’  before the man’s life comes to the inevitable conclusion. 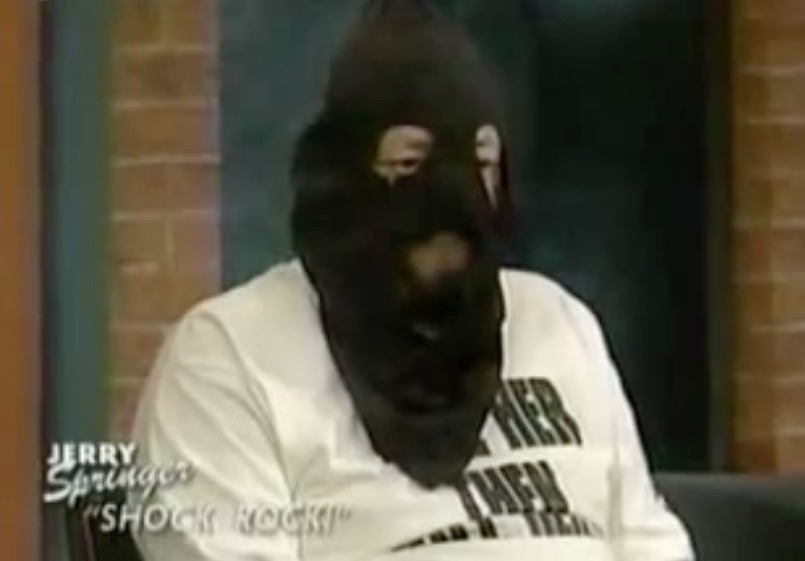 Rodney Asher makes fascinating documentaries and this latest from him is compelling yet gruelling viewing of a tragic man.