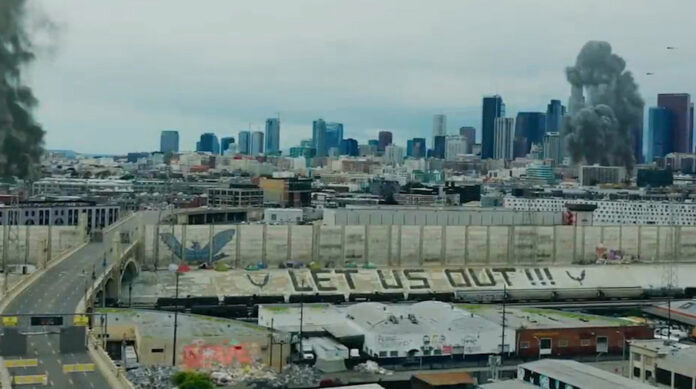 Set in a near future, Songbird has a US ravaged by an airborne virus Covid 23 that is fatal within 24hours once contracted. It’s led to a proper lockdown, unlike the UK one where second rate transient popstars and taut skinned plastic surgery addled satellite TV news presenters ignore the restrictions, where a terrified population people cannot even leave their own homes and in that respect we can’t help feel that Donald Trump is behind it all in his latest effort to prevent having to leave the Whitehouse.  The only people who are able to go about their day to day lives freely are those with immunity to the virus and wearing the much sought after yellow wristband enabling wearers to free unrestricted travel around the city.

It’s Nico (K.J. Apa) , a bicycle courier who is immune and cycles round the city and for once able to go through red lights without mowing own pensioners,  delivering parcels to addresses which no longer have postboxes but sterilization chambers. In that capacity Songbird takes in several individual stories including a disabled war veteran, an aspiring musician performing via social media, Nico’s self isolating girlfriend and her elderly neighbour, and a shady business man and his wife Piper played by Demi Moore in a Morticia Adams- wearing-aviator-glasses combo and fiercely protective of her  ill daughter. Many of these characters are tied together by Emmett (Peter Stormare as a psychotic sleazeball) from the city’s Department of Sanitation with a small army of armed men despatching those without immunity and disposing of the bodies of the recently deceased. But it’s the yellow immunity bands allow people unrestricted movement around the city that Nico seeks in a bid to save his girlfriend from Emmett after her elderly neighbour passes away.

Co-written and directed by Adam Mason, Songbird, much like 28 Days Later, captures an eerily empty cityscape and makes effective use of a reliance on technology that includes GSP, drones and a trace & track app that works, unlike the ropey UK one that only traces & tracks backhand government deals.  Filmed during the pandemic itself Songbird takes a little while to draw the separate story strands together before the narrative becomes a single thread as Nico attempts to escape the pursuit of Emmett and save his girlfriend and in that respect it is a little formulaic.

Moving along at a brisk 90 minutes there’s a mix of unknowns and well known faces with Alexandra Dadarrio underused in a role that sees her storyline take a nod to Blue Velvet whilst Peter Stormare adds another greasy bad guy to his back catalogue and it’s good to see Demi Moore back on screen albeit in a thriller that can’t resist a cheesy end line with Nico’s courier telling us that, ‘We were delivering hope’ set to a soft rock score. Not all the stories are as developed as they could be to optimize maximise  tension but with vaccines emerging to bring the pandemic to a close over the coming year it’s likely that Songbird, as enjoyable as it is, will be the first of many similarly themed films to follow.