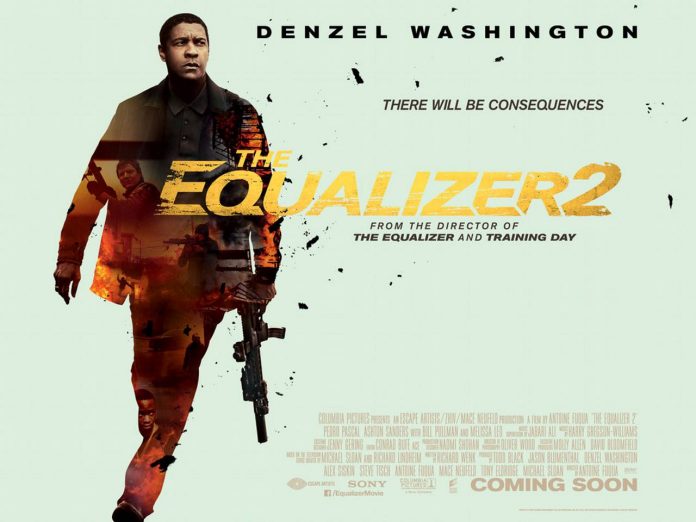 …..and it’s for this reason that in my school days my maths teacher chose never call me The Equalizer. Thankfully in this week’s new release director Antoine Fuqua (The Magnificent Seven) has chosen not to film Denzel Washington reciting his times table. After the success of the first film this second film, The Equalizer 2, is the first sequel that Washington has made in his forty year career.  As the ex-covert government agent Robert McCall he’s upped the ante of righting wrongs mainly because an OAP seeking revenge for the neigbour’s kids stealing his bag of Werthers Originals was never going to cut it. At 60 years old though he may well be getting a little long in the tooth to be dispensing summary justice as he does here. Nonetheless it’s still a satisfying experience seeing him in the opening sequence despatching a swarthy bunch of villains on a Turkish train in order to return an abducted daughter to her mother.

It’s a reminder that McCall still has what it takes as an avenging angel and what sets him off on his roaring rampage of revenge in The Equalizer 2 is the murder of an old friend from his agency days. However it takes a while for the story to really start as this is a leisurely paced sequel in its first half which takes its time before it all kicks off even though it is punctuated with some decent moments of him doling out justice in the most brutal way without even getting a crease in his trousers.  Director Fuqua is back for the second installment but takes a ponderously long time whilst Washington rights several minor wrongs which includes a mural ruined by graffiti which prompts a secondary storyline about taking a young student under his wing and steering him away from a life of gang related criminality. Both Fuqua and Washington are influential black film makers and they take the opportunity with this strand of the story to say, ‘Hey kids! Keep out of the ghetto’ and sermonize which is fair enough but Washington here has the sort of mood swings you expect from a soldier with PTSD. Though The Equalizer 2 has scenes of satisfying retribution it does take itself too seriously almost wanting to be the 1967 existential French thriller ‘Le Samurai’ rather than the brutal popcorn pleasing blockbuster it really is.

It’s the latter half where Washington’s wasting of wrongdoers really kicks in as he goes after those that killed his friend with a climactic ending set in a storm struck small town with truly apocalyptic weather to match the ruthless efficiency with which he despatches those out to do the same to him .

Once again written by Richard Wenk (whose schooldays must have been turmoil with that name)  The Equalizer 2 follows a similar template to the first film but is another installment in what is likely to be a franchise that will have taken a plot point from TV’s The Incredible Hulk where he moves on to start a new life in another town after the carnage he causes here.

The action is ruthlessly effective but it does lack a villain as psychotically unbalanced as the first films Martin Czokas but with the film already having taken $100m so far we can expect Washington to return soon.