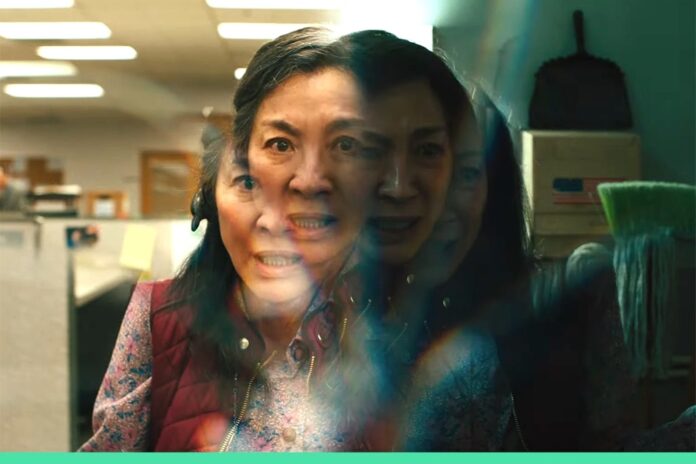 It has been said numerous occasions before that in these modern times with so much information being thrown at us it’s hardly surprising that our attention spans are so small and that….um….we…….um err….um…..sorry completely forget what we were going to say. But it’s for that very reason that Everything Everywhere All at Once may well find an audience with its micro scenes.

At the centre of it all is Evelyn (Michelle Yeoh) who right from the start is subsumed by everyday life. With a laundry to run she is also struggling with a mountain of receipts for an imminent IRS appointment with a tax inspector played by Jamie Lee Curtis complete with paunch and mustard turtleneck and clearly revelling in the role, her husband Raymond (Ke Huy Quan aka Short Round from Temple of Doom but now all grown up) is about to serve divorce papers on her, her daughter Joy is rebelling against her mother’s expectations and Evelyn’s father is grumpily demanding too. Life has got to be better than this and it’s in a lift her husband’s body is occupied by another Raymond from a parallel universe instructing her that she, like him exists in other incarnations in a multiverse that’s seeing her living as an opera singer, a chef, a Hong Kong action star and a maid amongst many others.  It’s all very Marvel multiverse inspired and directors Dan Kwan and Daniel Scheinert known collectively as The Daniels throw literally everything into the mix from giant universe sapping bagels to sausage fingered lesbians. Its Evelyn’s daughter Joy who becomes the threat to Evelyn’s quest for her real self and to ‘live your best life’ – the phrase of every deluded slacker. Weighted down by her mother’s expectations Joy has snapped and now assumes the identity of Jobu Tupaki hopping through the various multiverses killing each incarnation of Evelyn as she goes.

The Daniels have drawn inspiration from everyone everywhere in a film that hops around wildly that must have been an Editors nightmare taking in 2001 a Space Odyssey to The Matrix to Hong Kong action films and even the Pixar film ‘Ratatouille’ and is surreally potty moments of mayhem but culminates in a message of compassion, unconditional love and #Be Kind.  Charlie Kaufman’s quirky influence is here as well as the Wachowskis’s underrated Cloud Atlas but Everything Everywhere all at once begins to strive a little too hard to be zany to the point of occasional incomprehensibility. Unquestionably funny at times with good ideas and a worthy theme that is all too relevant in an age of what feels like nihilism but at well over two hours it’s an exhausting chaotic watch.

Watch the Everyone Everywhere all at once trailer HERE