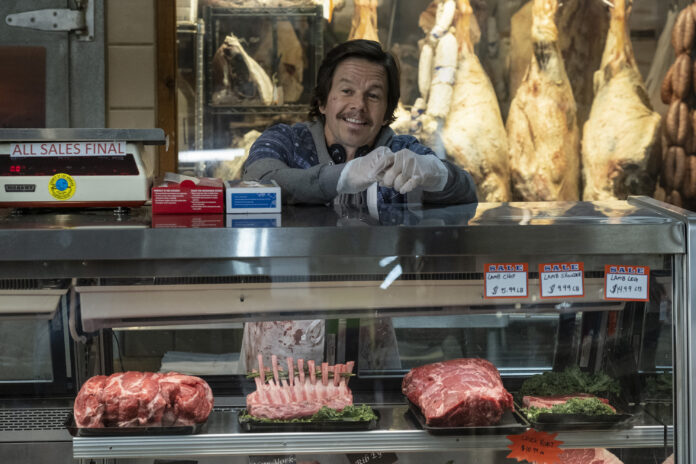 Mel Gibson’s fall from grace found him ostracized from Hollywood for some years so it’s hardly surprising that a story about redemption would appeal to him. Father Stu is one such film being both a true life story as well as it being about a priest would also appeal to the actors Catholicism. Father Stu (Mark Wahlberg) was Stuart Long , a boxer who has been battered in the ring once too often in a way that Catholic altar boys can also identify with if the Oscar winning Spotlight is anything to go by (’You’re fired!’ – Ed) . Having acquired more injuries than trophies and money Stu is warned by a doctor any more fights could be the end of him. A career reappraisal finds him going to Hollywood to become an actor but unlike the pantomime of wrestling he has no background in acting up and work is often just infomercials the acting equivalent of being boxing’s ring girl.

But it is in Hollywood where he works part time in a butchers that he catches sight of customer Carmen (Teresa Ruiz) who is resistant to his charms but tracks her down to the Catholic church  where she works and feigns and interest in the church in order to get to know her. It’s when he has a serious motorcycle accident that’s gruesomely realistic that he sees the light having not seem them on the vehicle that ran him over. It’s whilst he recovers and recuperates in hospital that he finds himself being called to the priesthood and it is that second half of the film that sees him persuade Malcolm McDowell as Monsignor Kelly of the seminary to enrol him. And it’s from here that the film follows his fortunes as he navigates the pit falls and problems of training for the priesthood but there is a light at the end of the tunnel if he manages to get through to the other side in a way not dissimilar to trying to drive through Newport

These true life tales are undoubtedly inspirational and the real life Father Stu was clearly a man of the people able to get through to anyone as witnessed in a scene where he and a far more secular colleague attend a prison where he’s able to speak to the prisoners on a level they understand. Written and directed by Rosalind Ross, the real life partner of Mel Gibson, the film’s more fascinated with the ‘before’ period of the story whereas the redemptive latter part where he is called to the priesthood is skimmed through with scenes not really exploring in any depth just why he felt drawn. The film whizzes through his training at the seminary with him allowed to preach at Carmen’s church almost immediately and Carmen herself quickly fades from sight after he is called to the church. Likewise Wahlberg convinces in the former part as the potty mouthed boxer and hustler but doesn’t convince in several of the key latter scenes. Its perhaps only in a scene after having received some terrible news where he is alone in the church deeply distressed and upset that gets anywhere near to his spiritual turmoil.

Wahlberg has turned in some decent performances notably his Best Supporting Actor Oscar nominated role in Scorsese’ The Departed’ which plays to his on screen strength as a hard man but the character arc of Father Stu also needs an actor with an innate sensitivity. Mel Gibson has something of a one note role as Stu’s father and Jacki Weaver is as good as ever as his loving but ultimately ineffective mother but overall Father Stu is something of passion project for devout Catholics Wahlberg and Gibson.