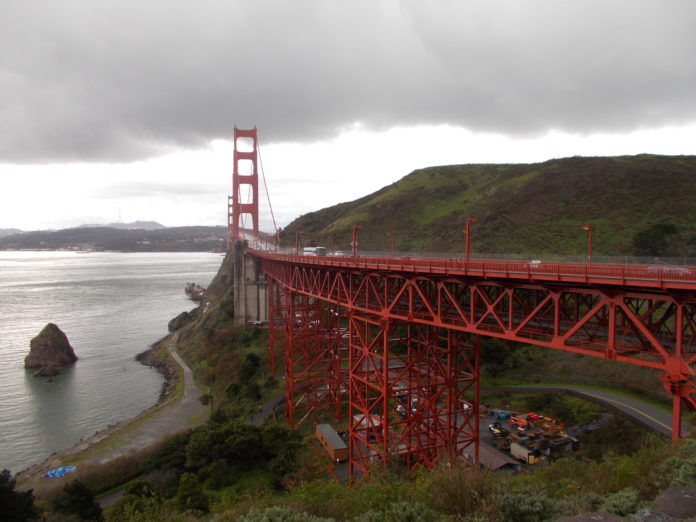 So many of America’s cities have iconic locations with New York probably one of the leading contenders but the streets of San Francisco are probably not far off. Close to LA it has several easily recognizable locations of which probably the most famous is Alcatraz prison. Originally a military garrison it was turned into a correctional facility or prison to you and I but was finally decommissioned in the early 70’s since when it’s been used for several films most notably The Rock in 1997 which was the last film to be made there and only then because there was a strike on which meant that the crew were able to shoot undisturbed by tourists for a few weeks. So all those exteriors you see in the film are the real things whilst the interiors are mainly studio sets or locations elsewhere passed off as the interior of Alcatraz.

It’s an intimidating place to visit and the approach as seen below shows that the island is far bigger than might be expected. It’s been used for a couple of Clint Eastwood films too notably Escape from Alcatraz (obviously) and the end of the third Dirty Harry film Magnum Force where the villain gets blown up as he waits in a guards post.

Of course The Rock also had a notable sequence on a tram on the cities famous and incredibly steep hills and it’s those steep streets which were used in one of films most famous car chases…..Bullitt, the Steve McQueen film that had him screeching round the streets of San Francisco himself because  of his own love of driving. The car was the classic Ford Mustang GT but several of the same streets were used from filming and cut together to make it the chase longer. Here’s couple of clips that show just how steep those roads are.

But the streets are so steep in places that one infamous road had to build a road as  a series of hairpin bends winding down the hill as it was too step to build a straight road on it. The road is Lombard Street and is a residential street that swarms with tourists and also those who queue up in their cars so as to drive down it as seen in the clip below. Of all the roads in the streets of San Francisco it is probably the most famous and was featured in the Barbara Streisand film, ‘What’s up Doc?’

And of course you can’t forget the Golden Gate Bridge most obviously used in Hitchcock’s masterpiece ‘Vertigo’ but since then in films as diverse as ‘San Andreas’ and ‘Rise of the Planet of the Apes’. Longer than expected it connects two parts of San Francisco and its incredibly windy as can be seen in this clip here…..

But the streets of San Francisco have had  a whole host of famous films shot in the distinctive housing and buildings and city centre which have included Milk, The Pursuit of Happyness, Mrs Doubtfire, Sister Act 2 and Pacific Heights and Dirty Harry. Many of these are in area of the city that the site seeing buses pass and so popular are these houses used in the films that it has irked the owners who have asked the tours to stop driving past their doors with a gaggle of camera crazed tourists……..all to no avail.