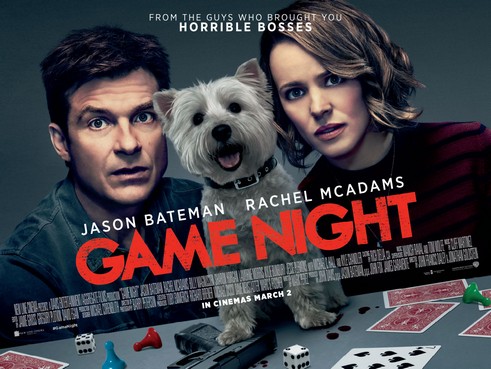 Like any good parent our Editor plays with his children and has his own version of Game Night his twins Adolf and Damien. This is normally a game of hide and seek where the twins are told to keep very quiet and not reveal their hiding place until they are found.  In typical style our Editor then takes the opportunity to go down The Nags Head where several hours later he attempts to remember where he lives. Never one to miss an opportunity our Editor has even been on a 2 week holiday whilst his boys hide under the stairs. In fairness if you ever meet his boys you’ll wonder why he didn’t make it a three week golfing holiday. We’re not kidding

Game Night is a similar. Starting off amiably enough it has an effective montage sequence of the game loving Max (Jason Bateman) and Annie (Rachel McAdams) meeting at a local pub’s weekly game night. Drawn together by their love of board games they marry and continue the tradition at home with another couple Kevin& Michelle (Lamorne Morris & Kylie Bunbury) and the dim witted Ryan (Billy Magnussen) who brings a different though equally dim date each game night.

Added to this is their creepy cop neighbour Gary (an unnerving Jesse Plemons) still pining after his ex- wife and excluded from their game night as he resolutely remains in uniform even when at home. Throwing chaos into their weekly game night is Max’s older and more successful brother Brooks (Kyle Chandler) an extrovert, overly confident city rich kid who everyone loves and overshadows Max with his extravagance.  In town on business it’s his idea that they all come over to the house he is renting for a game night like they’ve never had before. Outlining the game he revels in throwing away Max’s board games telling them that he will be kidnapped tonight and that the first to find him will have the prize of his luxury sport car that he first rolled into town with.

For a comedy thriller this is unusual in that there is only one credited writer, Mark Perez, whereas there is normally a team of writers. The writer’s room concept is a uniquely American one and can produce great results. However this is Perez first produced script in eight years and his previous films have included Disney fare such as Herbie Fully Loaded and The Country Bears. It all starts well enough and there are some almost decent running jokes notably one about Michelle sleeping with a famous film star. Unfortunately it never really develops into anything laugh out loud funny (though Lamorne Morris does do a decent impression of said star). Perez script has a few accurate but half hearted digs at the tropes of action film staples – the glass table which are the first to be demolished during fist fights – but it again just peters out.

Its directors John Francis Daley and Jonathan Goldstein whose previous included ‘Vacation’, the 2015 reboot of ‘National Lampoon’s Vacation’, and here they’ve added some nice touches. A stylised board game type layout of the neighbourhood exteriors & cars connects several of the scenes and their use of camera in the ensuing car chases is innovative. There’s also a technically proficient scene as each of the friends is chased around a house whilst throwing a precious item to each other all seemingly done in one take.

The comedy thriller, much like the comedy horror, is notoriously difficult to get the balance right and whilst Jason Bateman, who also produces, is undoubtedly a charming screen presence in comedies like this and ‘Office Christmas Party’ it misses the sort of touch that someone like Chevy Chase had in his prime in films like ‘Foul Play’ and the first ‘Fletch’.  Whilst this is entertaining enough it’s disappointing to see Sharon Horgan whose brilliant series Catastrophe shows just how good she is but how wasted she is in this and Perez would have benefited from a script polish by her and Catastrophe co- writer Rob Delaney.