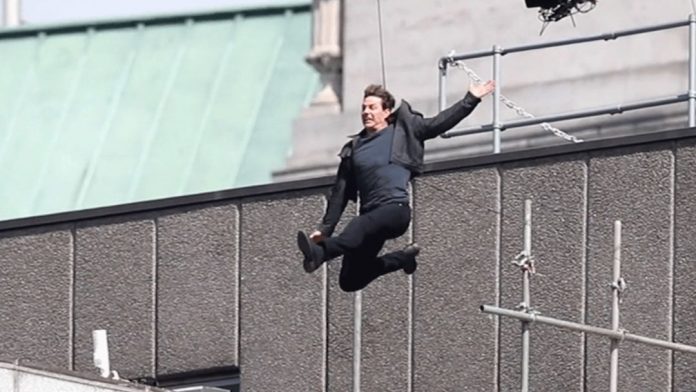 With the recent announcement that Mission Impossible 6 will be titled ‘Mission Impossible : Fallout’ director Chris McQuarrie, the first to direct two films in the franchise, explained the meaning of the title saying,

‘The title has multiple meanings in the film, from the literal to the figurative. There is the threat of nuclear terrorism hanging over the movie, which is the literal threat. There’s the notion that what’s happened in the movie is the end result of choices that Ethan Hunt has made in his life. It’s Ethan’s past come back to haunt him. It’s the fallout of all his good intentions.

The one thing that came out of it was I thought it should be a one-word title. This is a different kind of movie, it should be expressing a different attitude. It should be striking its own ground, and that’s what I felt Fallout did.’

Of perhaps more interest is the first footage of the accident that Tom cruise had on set that saw him break his leg forcing a shut down of the shoot for some months. Appearing on the UK’s Graham Norton show with the rest of the cast he introduced some footage of the stunt that went awry. It appears the stunt went as expected but that he landed badly which broke his foot. The footage shows just what happened.

Incredibly it seems that the film still has some weeks of shooting left but it looks like we can see the first trailer next weekend when it plays at the superbowl.