Like Gemma Collins and a GCSE maths exam, the Fast and Furious spin off characters Hobbs and Shaw don’t really understand each other. Both buffed to the  max who let the fists fly both are lean mean fighting machines who, in typical action film style (adopts movie trailer voiceover), …….work alooooone!

Here they are pushed together for the greater good of mankind when a genetically enhanced  bad boy and self titled ‘black Superman’ called Brixton (Idris Elba) attempts to steal a deadly virus that is  protected by an elite set of soldiers that included Hattie (Vanessa Kirby) who’s protected the virus from Brixton by injecting herself with it. Unfortunately she also finds herself fitted up for the elimination of her squad and it is top manhunter Hobbs who’s hired to track her down to protect the virus from falling into Brixton’s hands. It’s only when Shaw (Jason Statham ) is also hired to work alongside him that he discovers that Hattie is Shaw’s sister. Now Vanessa Kirby is very easy on the eye so it’s hardly surprising that there’s the undercurrent of a romance between her and Hobbs, something which her overprotective brother Shaw is keen to prevent and in true movie style they’ve only got 72 hours to save the day before the virus racing round Hattie’s body mutates turning her brains to mush leading us to wonder why Gemma Collins was not cast to show the potential after effects. 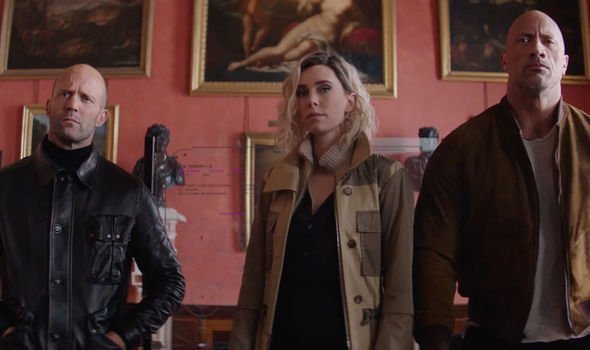 Hobbs and Shaw is one of those big summer action blockbusters that you switch off and enjoy with pizza and beer which the distributors thoughtfully provided us with and was ideal accompaniment. Deliriously daft this has been directed by the ex-stuntman David Leitch whose debut was the rather good Atomic Blonde. However the action here is significantly toned down for what is a summer film so though the fights are brutal the consequences of the right good kicking that every villain gets is never really seen and plays like a toned down John Wick.

Leitch has put together some decent sequences especially the London set pieces although unlike Tom Cruise in Mission Impossible Fallout where he speeds round Paris without a helmet here Idris Elba, who is presented as indestructible cyborg resolutely wears a helmet when zipping round on his motorbike. Johnson and Statham do their schtick but it’s Kirby who has impressive credentials here like a force of fighting fury and is no wilting wall flower waiting to be rescued.  As good as the action is for the first two acts of the film the real plus part of Hobbs and Shaw is actually the squabbling banter between the two leads and would have benefitted from more of this in their attempts to have one over each other with the best moment being an airport check in which has a callback in one of several credit sequences…..but audiences will have to wait to the very end of the credits to see them all.

The male leads tread water in their roles but there’s nothing wrong with that in a film which, despite Johnson spouting occasional  Nietzche, is an out and out is a big, bold, bombastic summer action film with an ending that suggests a spin off of this spin off!

Here’s our A-list star we hired to show his action credentials (remember to subscribe to our YouTube channel)…….

Here’s the Hobbs and Shaw trailer…….