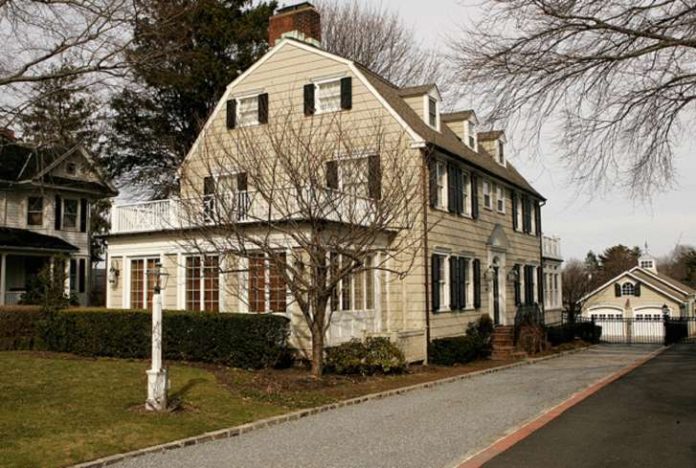 It’s the sort of thing that estate agents tend to forget to tell you when they turn up in their shiny suits stinking of cheap cologne to show you round a new house you’re thinking of buying but it’s the sort of thing you hope they’d remember to tell you especially now that this house at 108 Ocean Avenue is on the market. It’s an address that may mean nothing to you but if we said it was in Amityville you may recognise that it’s the infamous house featured in 1979 horror film ‘The Amityville Horror’ a film that was remade in 2005 and had several sequels including a new one called ‘Amityville:The Awakening’  which should have been released in 2015 but is still waiting for a release date although it’s rumoured to be coming out in 2017.

The house was the site where the infamous 1974 murders occurred when the then 23-year-old Ronald J. DeFeo shot and killed his parents and four siblings while they were asleep in their home. DeFeo’s attorneys reportedly argued that he had been driven to murder by voices in the house telling him to do it.

After the atrocity a family bought it for the knock down price of $80,000 (£54,300), yet ended up fleeing the house and all their belongings one night after only a month of alleged paranormal activity. In 1977 a book based on the alleged events and the subsequent film made the house internationally famous.

To make the house more marketable a few changes have been made including the address being changed to 108 Ocean Avenue and the original address being completely wiped from existence. Most noticeable is the pair of eye-shaped windows facing the street which have been rebuilt look significantly less spooky.