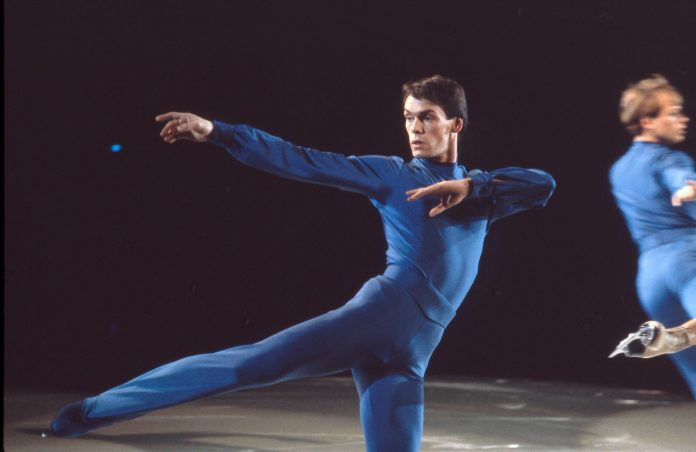 Who needs an Ice King when we’ve got Celebrity Dancing on Ice 2018 or as we like to call it ‘D-list celebs clattering around on their arses’. Which prompts the question, ‘Why watch  for entertainment when there’s more fun to be had at London Zoo gorilla compound watching the keepers trying to teach Gemma Collins to stand upright?’

At the other end of the talent spectrum are the superlative skills of the late, great John Curry. The Ice King is a long overdue evaluation of his artistry. The documentary examines how his ambition to be a ballet dancer was thwarted by his gruff, overbearing father. Instead he turned to ice dancing which was acceptable to his father because it was classed as a sport.

Curry’s oppressive childhood was unleashed and given free rein when he was allowed to dance albeit on ice and away from his father’s influence. It enabled Curry to also covertly embrace his suppressed homosexuality.  Director James Erskine has uncovered some remarkable and rare footage of the British skaters artistry which was rewarded when he won gold at the 1976 winter Olympics. He was already the European champion and had won the World Championship too and was deservedly called The Ice King. But this was the 70’s and a far less enlightened time and all that the journalists were really interested in at the press conference was whether he was going to come out and admit his homosexuality.

It was an issue that would dog him throughout his life and what comes out of this documentary is just what an utterly tortured soul Curry was. His genius was beset with mood swings, loneliness and depression and eventually injury forced him to retire from competitive ice dancing instead performing shows on ice. The footage of these shows performed by his own company of skaters are utterly captivating. Yet this footage is nearly all home movie super 8 shot by members of the audience and it seems incredible that that these shows were never professionally filmed.

What the documentary is at pains to emphasise is Curry’s dedication to perfectionism at any cost – and in his case it was a huge financial cost that meant he had no choice but to perform as he was the draw for an audience. Yet regardless of the cost he generously insisted on paying everyone equally. It was a move that inevitably led his company to massive debt and bankruptcy forcing him to continue to perform even though by then his years of skating meant he was constantly in pain.

Still rightly regarded as The Ice King his star has arguably been outshone by Torvill & Dean whose Bolero was as good a performance as any that Curry gave and with the Winter Olympics in full flow this is a timely reminder that his greatness as the Ice King was equalled only by tragedy.