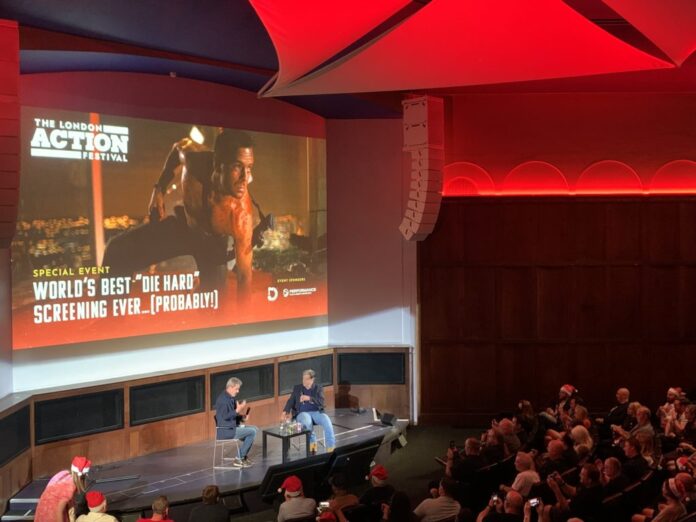 At the launch night of the first ever London Action Festival was a screening of the action classic Die Hard. The evening started off with Robert Davi aka Special Agent Johnson serenading the audience, who were all wearing Santa hats, with a variety of show tunes and of course Let it Snow that plays over the end credits.  We then had the film and this was followed by the highlight of the evening director John McTiernan on stage for a Q & A session. McTiernan has helmed a number of big blockbusters that have included not only Die Hard but Predator. The Hunt for Red October and The Last Action Hero ( which is surely due a reappraisal).

The director was asked a number of questions about the making of the film as well as the  question that often posed and debated over the years namely, ‘Is Die Hard a Christmas movie?’ whereupon he gave an extraordinarily long answer that took in cave painting and all manner of anthropology. It was a great evening and we would love to know what you make of the Hollywood director and the whole Q & A session is on shown below and is on the AnyGoodFilms youtube channel ( www.youtube.com/anygoodfilms  – remember to subscribe for all manner of exclusives!)

So John McTiernan gives us the answer to the question Is Die Hard a Christmas movie?