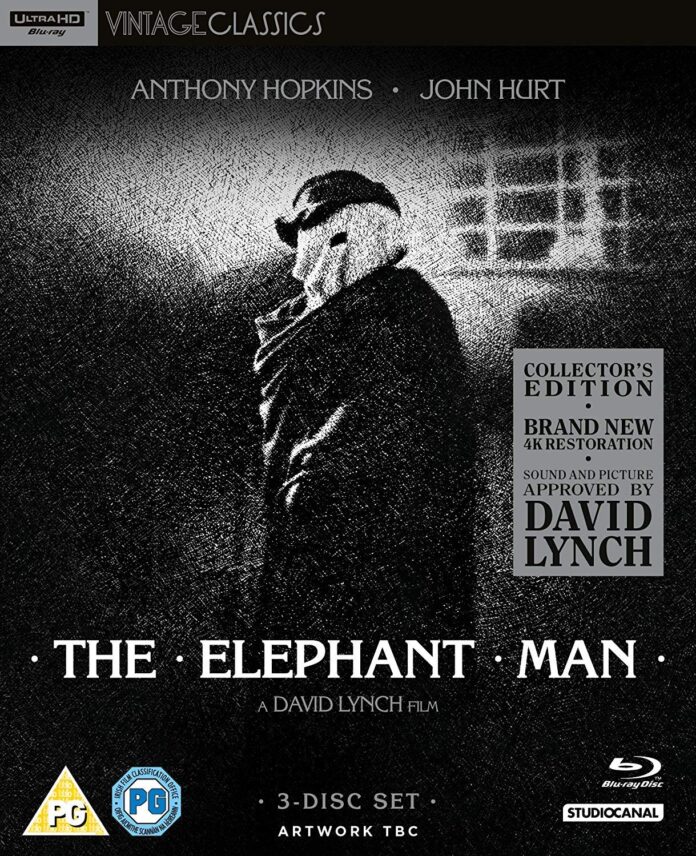 That David Lynch, having stunned audiences with Eraserhead, would then go on to team up with Mel Brooks and make a black & white Victorian set drama about a disfigured man seems ridiculous and yet with The Elephant Man they did exactly that. The 1970’s had seen Brooks spoof a load of different genres including westerns (Blazing Saddles) , horror (Young Frankenstein) , silent films (Silent Movie), and even Hitchcock (High Anxiety) and had newly formed his own production company BrooksFilms wanting to make more serious fare and Eraserhead had caught his eye. Lynch was writing his own script for a film called ‘Ronnie Rocket’ but with the finance not forthcoming his producer met with him with four scripts to pitch –  the first one being The Elephant Man. The title alone was enough to trigger his interest and he immediately opted for that and a meeting with Brooks, who was based at 20th Century Fox was arranged. Brooks was immediately taken with Lynch and offered him the gig and the director stared work on rewriting the script which had been based on a chapter in a little read book. The script attracted a stellar cast of British acting talent that included Antony Hopkins, Sir John Gielgud, Wendy Hiller, Freddie Jones, Michael Elphick, Anne Bancroft (Brooks wife) a young Dexter Fletcher as well as R2D2  …sorry, the late Kenny Baker.

But the entire film relied on both the actor who would play role and also the makeup. It was John Hurt who was offered the part having come to Lynch’s attention in The Naked Civil Servant and met with Brooks and the producers at Brooks office where they had erected 10’ x 8’ pictures of the real elephant man John (actually Joseph) Merrick. Hurt was immediately intrigued by the role and Brooks recalls Hurt leaving the office already beginning to assume the posture of Merrick. Hurt was not concerned that he would be unrecognisable in make up but it was the prosthetic make-up that would make or break the film and it was make up artist Christopher Tucker who had heard that the film was going to be made and wanted the job of designing the make-up. Tough he had been working on films for ten years it was only a credit for the Star Wars cantina sequence that suggested that he could do this this type of make up. In fact Lynch himself was going to do the make-up himself until after four days of wrestling with it he gave up and handed it over to Tucker. Tucker though had negotiated himself a deal to be left alone and his design not micromanaged and no one would see the final work until it came to shooting. Prior to this both Hurt and Brooks wanted Merrick’s appearance only to be hinted or partly glimpsed until a later scene where Hurt would be seen in the full prosthetic glory. Initially it had taken 12 hours to apply the make up having been made up of many pieces and layers and Hurt was bought to set from Tuckers workshop for the first time. By all accounts there was a stunned silence and crucially no one laughed. No one even smirked. It was an extraordinary piece of work and Hurt’s performance still came through of a man who, despite his hideous disfigurement, was a refined and essentially decent human being.

The Elephant Man opened small in just two cinemas in New York and LA but word of mouth spread quickly and Hurt believes that the film would have bombed if it had had a blanket opening in thousands of cinemas as is the practice today. It didn’t help either that the studio did not know how to market it bizarrely regarding it as a monster movie. It is anything but that. What is is, is a deeply and profoundly moving study of human nature, the capacity for kindness, as well as intolerance but ultimately uplifting. It was little wonder then that the film was nominated for 8 Oscars including Best Film, Actor, Director and screenplay and yet not for make- up. If ever there was a case for a Best Make Up category The Elephant Man was it and the unions that had been campaigning for such cited it as the very reason why there should be such a category. The Academy understandably relented and the following year Rick Baker won for his jaw dropping effects in An American Werewolf in London. Yet the despite its eight nominations it won none. Hurt’s only real competition  was Robert DeNiro for Raging Bull for which he won. Lynch was up against two directing giants with Martin Scorsese for Raging Bull and Roman Polanski for Tess and yet they all lost out to Robert Redford’s saccharine soap opera Ordinary People which also won Best Film proving yet again that often what should win an Oscar often doesn’t.

The Elephant Man is part of the superb Vintage Classics collection and has a decent array of bonus features with several interviews with Lynch but also with the late John Hurt and Mel Brooks plus a feature with make up designer Christopher Tucker. There’s no commentary but as Mark Kermode says, ‘this is  one of the most moving screen dramas of the 20th century’. He is, as ever, right and it’s almost too incredible to think that after this Lynch went on to a career low with his version of Dune (read about it HERE).