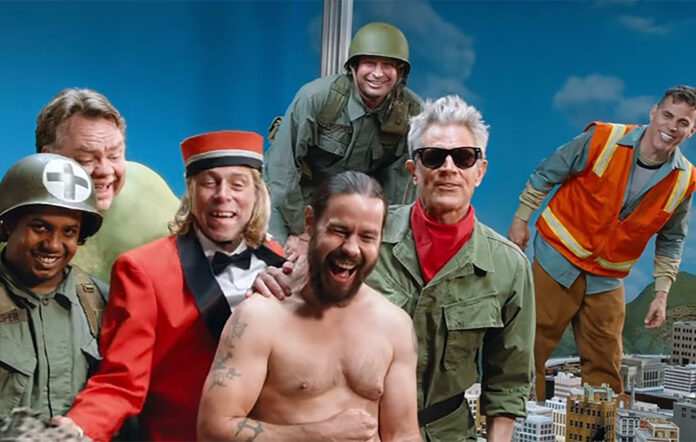 It’s been twelve years since Jackass 3D but he team are now older but certainly no wiser as Jackass Forever proves with ever more outrageous if still familiar pranks. The tone is set from the start with an opening sequence where Johnny Knoxville, Steve–O, Wee Man et al are attacked by a giant monster rampaging through a city in their version of Godzilla but on closer inspection it is actually Chris Pontius cock in close up and appearing to be the biggest cock to grace a screen since March 20th 2020 when one told the entire UK that he was putting the UK into lockdown.

With Ryan Dunn having been killed in a car accident and Bam Margera having left the film under a cloud Jackass Forever sees the original team joined by five new team members (read about them HERE) and its hardly surprising when Knoxville and co are all around the 50 years of age mark (and Knoxville’s hair goes from brown to grey) and this new film plays a little as though they are passing on the baton. But the new recruits are not spared with the monstrously morbidly obese Zach Holmes taking some gruesome challenges though never facing his biggest challenge being presumably to avoid Type 2 diabetes. In fairness the original team are not without the most dangerous pranks – Knoxville and Steve-O both end up concussed but it is Ehren McGehey who suffers for his art. Really suffers. It’s him who the camera captures moments of genuine terror when he is strapped to a chair covered in honey and chunks of salmon as a hungry bear is released into the room. It is also McGhehey who also sustains an almost unending assault on his knackers which sees them punched by a heavyweight MMA fighter, struck by a baseball pitcher and finally stomped on by a pogo stick as they test out a metal cup he’s wearing. The baring of bollocks as ever is mainly left to Chris Pontius who seems the most reserved of the entire team here mostly playing the role of onlooker enduing only the very occasional prank.

Whilst the Jackass team were undoubtedly influential in prompting all manner of woefully unfunny wannabes including the lamentable Natural Born Pranksters the Jackass team remain the original and best. Even at a brief 97 mins Jackass Forever is a little overlong with several pranks not as effective as might be hoped but when they work, they work brilliantly especially in one sequence which sees them locked in a with a rattlesnake when the lights go out and the night vison camera capturing their wide eyed desperation as they scrabble to get away from the snake.

Learn how they got the Jackass team back together HERE