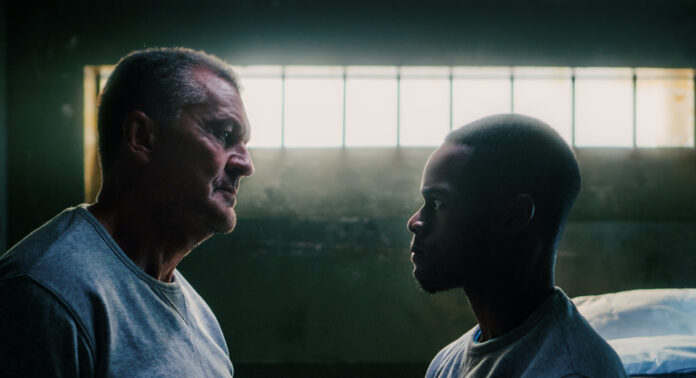 Latest under the category, ‘does what it says on the tin’ is A Violent Man starring Craig Fairbrass as prisoner Steve Mackleson, a violent man, as seen right from the opening shot as he is seen in silhouette in his attempt to turn another prisoner into a colander by repeatedly stabbing him. It’s a pretty extreme way to try and get a cell to yourself even if you’re clearly a risk to all and sundry having been incarcerated for a double murder in a maximum security prison.

Mackleson is a man with plenty of issues. Violently unstable he is in danger of becoming institutionalized as he serves his time and the film offers plenty of scenes as he ruminates on the nature of violence and when his new cell mate, a young black gang member Marcus (Stephen Odubola) gives him a shot at redemption in trying to divert him from the life he has been drawn into. Mackleson is also aware of his top of the pile pecking order as the most feared man on the block, a title that is all too ready to be challenged by other prisoners notably by Frank Gillespie (Jason Flemying who is on a roll with recent films Boiling Point & The 355) all too keen to be top dog and leads inevitably to Mackleson doling out the sort of brutality only ever seen in a Tory title challenge. Also thrown into the mix and adding to his inner turmoil is his long lost daughter suddenly from out of the blue wanting to see him for the first time.

Craig Fairbrass has made these psychotic hard men roles in Brit films his own and his ability as an actor does raise the role above the normal one dimensional hard man characters normally seen portrayed by Vinnie Jones in such films as the Rise of the FootSoldier  franchise  (watch our interview with Craig Fairbrass HERE about the latest Footsoldier film) This rollercoaster of emotions is written and directed by Ross McCall, an actor himself with an extensive list of credits, and this is his directorial debut. A Violent Man adheres to the low budget ethos of keeping it simple and remains almost solely within Mackleson’s prison cell but its confining it to that location with a wordy script that makes this perhaps better suited to a stage play.