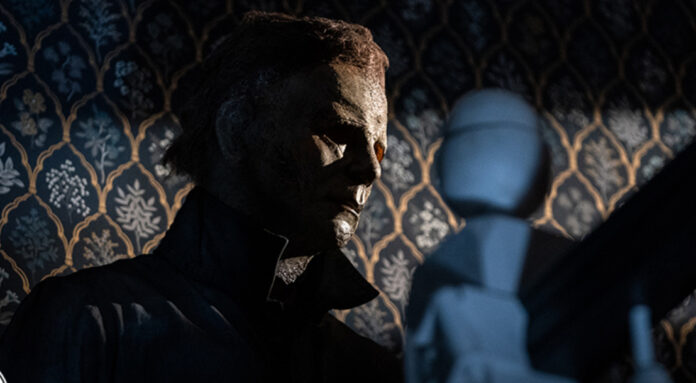 When James Jude Courtney began to understand what director David Gordon Green and Oscar®-winning special effects makeup designer Christopher Nelson needed to draw from his performance as The Shape, Courtney looked to his character designers as inspiration. “When I saw the scar tissue, burns and the effects that the elements had to Michael’s body, I talked to David about what that meant for my physicality,” Courtney says. “We trust each other, so we allowed the things that happen to Michael in his cave to start re-empowering me as The Shape. That naturally shifted the way my body moved, my stature and how my muscles and skin reacted.”

Although it is exceedingly uncomfortable for performers to sit in the makeup chair for hours on end as their prosthetics are applied, Courtney found the experience cathartic. The physical transformation, aided by costume designer Emily Gunshor’s wardrobe, proved invaluable. “Watching and feeling the work that Chris Nelson and all these talented people did to me, I began to morph and shift and change into Michael,” Courtney says. “Once I put on Emily Gunshor’s amazing wardrobe, I would sit in it and ferment…and let it take over me. Then, I would be in some altered state the rest of the night.” He pauses. “Dude, it’s better than drugs.”

Although Halloween Ends is the finale of the trilogy and this chapter of the franchise, Green suspects that someday, somewhere, Michael Myers may be resurrected somehow. “I have a feeling that, just as Frankenstein’s Monster, Dracula and mummies and vampires and zombies find new ways to have their stories told, Michael Myers has stepped into the lore and legacy of classic movie monsters,” Green says. “One day, he will find a new way to show up in some other shape.”