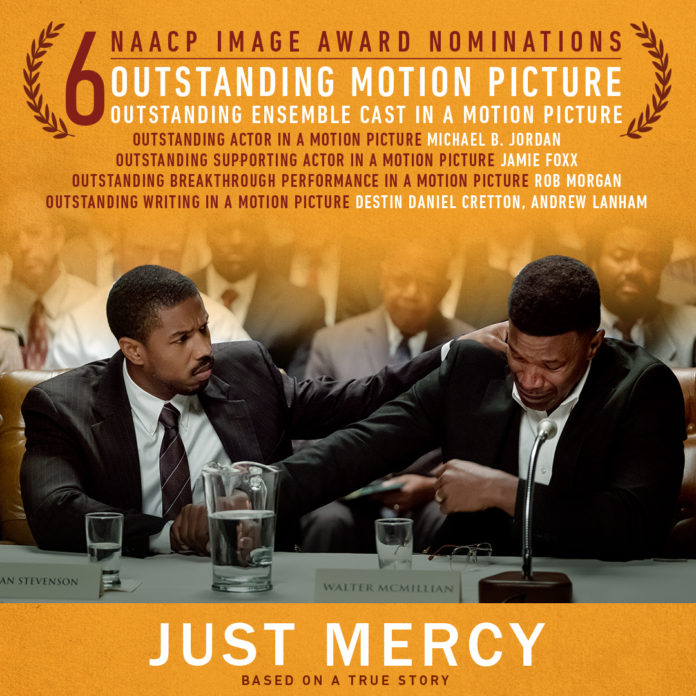 ‘Some of my best friends are racist …..and they’re black and they’ve got a point’, is a line from ace Scottish stand up comedian Frankie Boyle but it’s a line that after watching Just Mercy seems apt with an insight as to just why the black US population are so suspicious of white legal representatives whether it be police or lawyers. Based on the autobiographical book by Bryan Stevenson,  a black US lawyer who, having graduated from Harvard no less, decides not to follow the money grubbing route that gives lawyers such a bad name and instead begins work as a civil rights lawyer working to free wrongly condemned Death Row prisoners. Teaming up with Eva Ansley (Brie Larson), a defence advocate, he soon finds there’s an immense amount of cases crying out for his help. 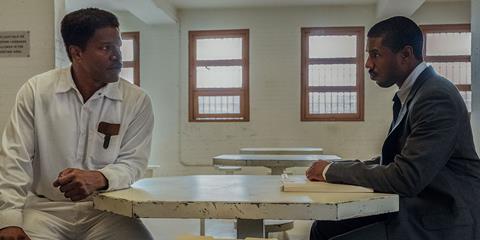 Starting back in 1987 Alabama it’s Walter McMillan (Jamie Foxx), a father of three, who is arrested by a racist town sheriff for the murder of an 18 year old white girl on the flimsiest of evidence from another criminal who has taken advantage of the opportunity to reduce his own life sentence. Stevenson (Michael B Jordan) soon finds a town appalled at his willingness to defend what they consider to be a cut and dry case of a guilty man unwilling to countenance the idea that he’s been framed by a red neck sheriff only too keen to put anyone from the black community behind bars bending the evidence to fit to get the conviction. And the evidence when looked at more closely by Stevenson is thinner than a very thin thing that’s been on a year long diet.

All the inmates on Death Row understandably are resigned to their fate having seen wave after wave of lawyers promise them everything only to find that they’re merely going through the motions to collect their fee.  But the stakes are so high it’s difficult to understand why a legal defence team wouldn’t try harder particularly in McMillan’s case where the evidence against him is laughable if the consequences were not so devastating.

And those consequences are seen in an electric chair scene movingly shot as Stevenson watches one of his clients put to death. It is brutal yet moving with the prisoners rattling their tin cups to a crescendo in support of the prisoner’s last minutes.  But Just Mercy and its story of a miscarriage of justice is a well worn genre and there is no surprise ending here. The surprises are more the vagaries of the US justice system and as a true story this is a damning indictment and it’s underlined by some truly shocking statistics over the end credits that confirm that justice for the black population is far from an equal right. Jordan is excellent in the lead role as is Foxx in his slightly underwritten one. Where the film does suffer is that it is about thirty minutes too long but this doesn’t lessen the impact of its message and the essential work that Stevenson did and has continued to do for over 30 years.