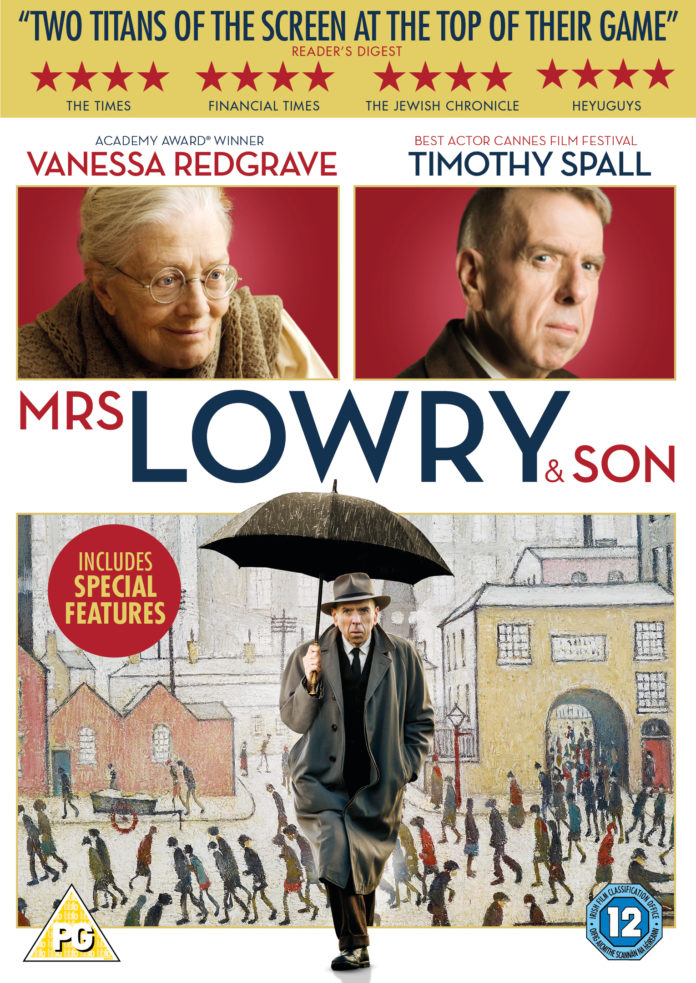 L.S. Lowry – By day rent collector , by night one of the UK’s leading painters of Northern industrial life and all the while living with his beloved yet cantankerous mum who never really cared for his work and never tired of telling him so…… and that’s what we get with new release of Mrs Lowry and Son. With Vanessa Redgrave and Timothy Spall in the lead roles the film has two great British actors in what is essentially a two hander script that perhaps which runs more as a stage play than a film with Redgrave’s Mrs Lowry bed bound and most of the film set in her bedroom where her sons acts as room service bringing up her meals that he has cooked and having to listen to her snobbish critiques of his work that he labours over each evening in the attic of the house.

So whereas his mum is a bit of a snob recounting her failure at having never made it as a concert pianist,  he instead sees, ‘beauty in everything’ as he succinctly states in one of many voiceovers in several of the  films flashbacks to their earlier lives that has influenced their outlook on life as they grow old together.  Dramatically there’s little that happens in the films brief 85 minute running time and it could have easily been condensed to a one hour TV drama.

L.S Lowry was one of the great British painters of the last century and, much like Gemma Collins attempt at maths homework, there is a simplicity to his work. Apart from the Mrs Lowry and Son film  itself the dvd is thin on bonus features with only a featurette that has Spall and a representative of The Lowry art museum in Salford that houses much of his work as the pair wander around talking about various paintings although it’s Spall who does much of the talking about his view of them which is all very well but not very enlightening and the featurette would have benefitted far more from an expert on Lowry. Though most of his works were of Northern working class life there are some striking self portraits in the museum and he holds the record for turning down Knighthoods and such like and it would have been interesting to see him paint the Queen’s portrait – after all even Rolf Harris has produced one although it’s a tribute to Her Majesty that it’s one of the greatest gifts she bestowed on the nation by letting Harris paint her portrait because at least it kept his hands busy and away from his other ‘interests’.

Mrs Lowry and Son as a film is stagey and perhaps not as engaging as it could be but Redgrave and Spall are always worth watching.