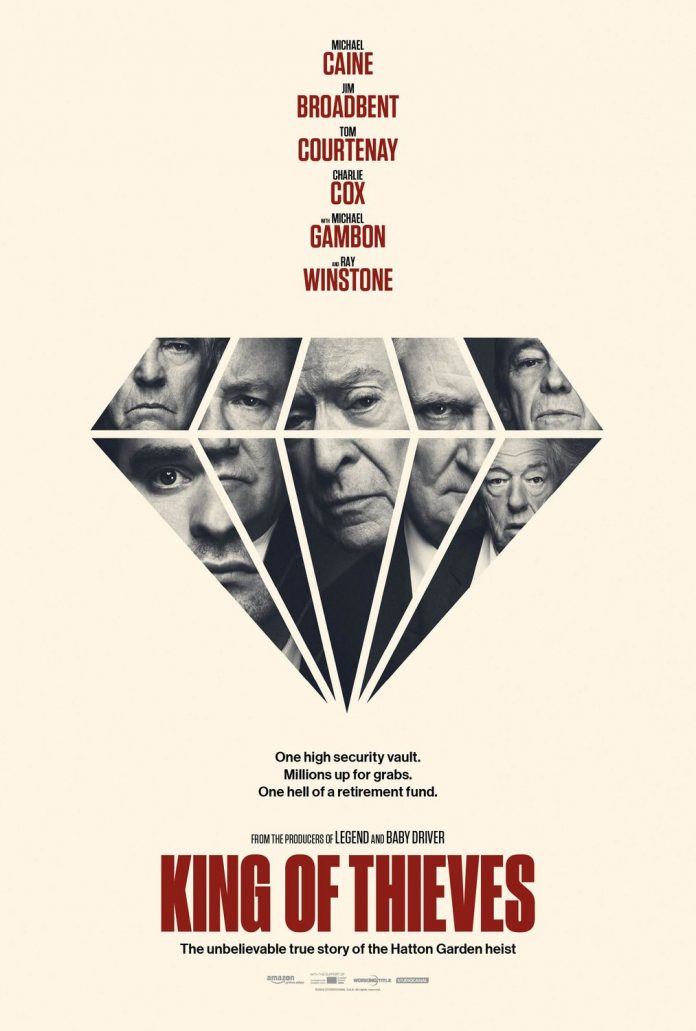 Led by Sir Michael Caine looking every inch his age he lives in a huge house alone widowed after the death of his wife from a terminal disease. Directionless he decides to do what he does best and puts together a group of old lags to burgle the bank from information a young IT expert (Charlie Cox) knew about overriding an antiquated alarm system before the crew drilled giant holes in the side of the vault. It’s this part of the burglary that’s been widely documented nit least in last year’s film The Hatton Garden Job and in King of Thieves it only takes up the second act of the film. Instead King of Thieves rightly focuses on how it all fell apart for the gang and it’s this part that is the best part. Little is known about this apart from when they were eventually caught but there seems to be little honour among thieves as seen here.

Director James Marsh whose last film The Mercy was another true story, has assembled the cream of old school British actors. So we have Sir Michael as the hooded eyed leader, Tom Courtenay as  the duplicitous look out who starts the ball of mistrust rolling, Ray Winstone (Jawbone) in his traditional heavyweight bruiser role, Michael Gambon (Victoria & Abdul) as a geriatric called Billy the Fish which we’re sure was a character in Viz comic, Paul Whitehouse (Ghost Stories)showing he’s as good a dramatic actor as he is a comic and Jim Broadbent in a role that we haven’t really seen him in before as that of the dangerously psychotic gang member happy to take whatever measures to get away with it all – frankly they could all be politicians.

But with so many well known for gentler fare what will shock some audiences  who will be attracted to King of Thieves by the cast will be the frequent use of expletives and each of them drop not just the F-bomb but C- bomb too. Cosy Sunday night drama this is not with all the gang seething and spitting out, ‘You C***’ at one another. In fairness there would be an air of unreality about a bunch of career villains using language no harsher than, ‘Oh, you silly sausage!’  but don’t let that put you off what is a very well made film which drops in clips of the actors in their younger days to great effect. King of Thieves is superior to The Hatton Garden Job and much of the joy comes from its great ensemble cast making it one of the most enjoyable British films this year.

Here’s the King of Thieves trailer……