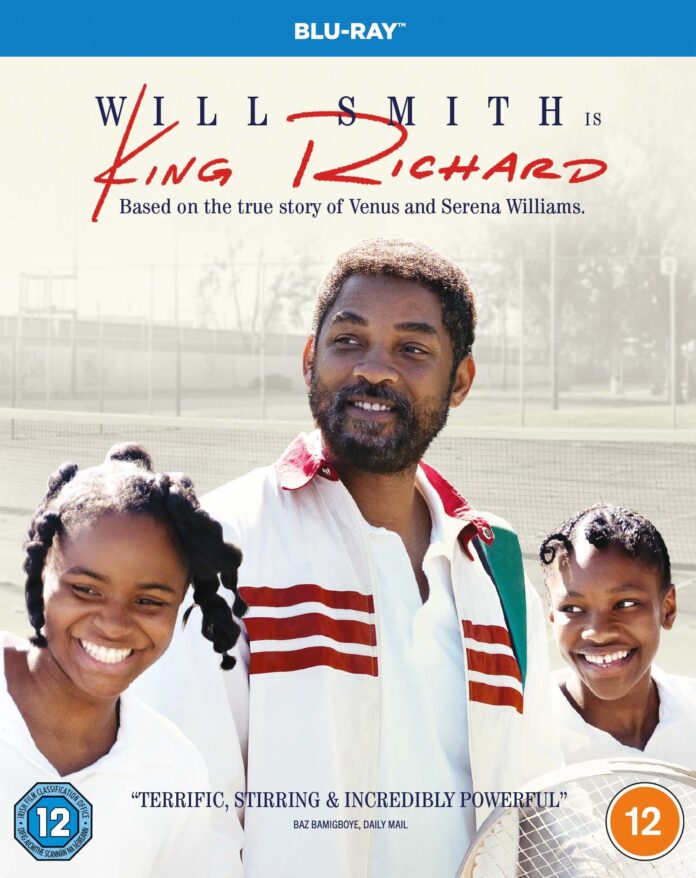 Will Smith’s come a long way since his days as The Fresh Prince of Bel Air and though he moved away from comedy with his early dramatic role in 1993’s Six Degrees of Separation it was the blockbusters that made him an A-list star with Bad Boys, Independence Day and Men in Black securing his status. It perhaps unfairly overshadowed the fact that he is a very, very good dramatic actor subsuming himself in the title role of 2001’s ‘Ali’ earning his first Oscar nomination followed by a second for 2017’s ‘The Pursuit of Happyness’ and now he’s up for a third nom as Best Actor in King Richard for which he is tipped to win. Out on Blu-ray King Richard is the true story of Venus and Serena Williams father Richard, a powerful driving force behind his two daughters identifying their talent for tennis and pushing them towards greatness. (read our review HERE).  King Richard, as he became known, had his profile heightened at the sisters’ matches.

Defiantly proud and confident of their talent he was often seen at their tournaments sitting in the crowd holding up a sign saying, ‘Told you so!’ and you’ve got to love him for that. Written by Zach Baylin the film follows his commitment and drive to get his daughters the opportunities they deserve to prove their talent. If there’s a weakness in the film it’s that it never really addresses them overcoming any degree of racism at the seemingly all white tennis clubs. Richard Williams as seen here is both stubborn and determined digging his heels in when possibly he should be taking better informed advice so it’s a credit to Will Smith that he makes the man both likeable and relatable. Equally Aunjanue Ellis as his wife and the sisters mother is very good too with endearing performances from Saniyya Sidney and Demi Singleton as Venus & Serena respectively and the film puts the family forward ad positive black role models.

The film is almost of epic length running at 2 hours 24 minutes and the King Richard blu-ray bonus features has only two deleted scenes making negligible difference to the films duration.  This King Richard blu-ray has a handful of extras mostly of the EPK variety with a ‘making of’ which reveals a bit of digital trickery going on with Saniyya & Demi’s faces being superimposed on those of stand ins for several of the tournament matches but it’s the Champions on Screen featurette that is most interesting with both actresses undergoing six weeks of intensive tennis training with the biggest surprise being that Saniyya, who is left handed, learnt to play with her right hand for the role. It’s the ‘Becoming Richard’ feature that is probably weakest with no input from the man himself and the lack of a 1-2-1 with him and Will Smith seems a missed opportunity and when one contributor talking about Smith in the role tells us, ‘he wanted to be Richard Williams on screen’ lends itself to a viewers’ face slap moment.

The King Richard blu-ray whilst having cursory bonus features that misses a commentary is  nonetheless a worthy addition to Will Smith’s back catalogue of dramatic roles of real life characters that have earned him Oscar nominations.  Twenty years after his first of three Oscar nominations this will finally get him the award he deserves.