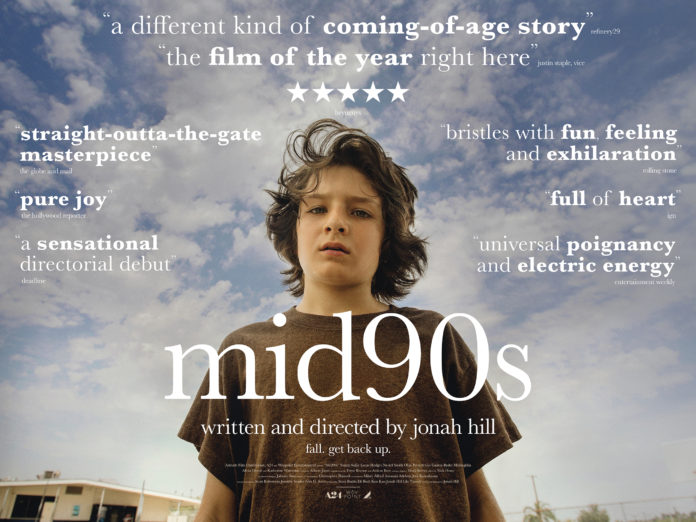 We were a little apprehensive about Mid 90s and what its title actually meant. Was it the age that Geri Halliwell joined the Spice girls? Was it an over estimation of Joey Essex IQ? As it is it’s the era when actor Jonah Hill has set his directorial debut following thirteen year old Stevie (Sunny Suljic). Looking younger than his years Stevie lives with his single mother and older and brother Ian (Lucas Hedges) who frequently beats him up. It’s hardly the most stable of home environments but despite his mother’s efforts he also struggles to make friends in school and eventually drifts into befriending a group of older skateboarding boys,  a pretty eclectic bunch with nicknames that befit them so FourthGrade is an older boy with the intelligence of someone far younger and then there’s F**kSh*t so called because that’s what he yelps when he has a mishap when skating. Played by Olan Prenatt a latino boy with luxuriant curly hair that should have him swishing his locks around in a mountain stream doing commercials for Timotei but here has him in his acting debut along with the others in the gang.

Like most kids his age Stevie finally finds a group that he fits in with yet despite their common love for skating they’re a group who are a bad influence and being older get him involved in things that even if he were their age he’d be best advised to not get involved with. So whilst they break into venues to go skating one of which ends badly for Stevie he also gets involved in casual drug taking, heavy drinking and partying. So maybe that last one is not so bad but what happens in this one house party they attend makes uncomfortable viewing when one of the girls takes a shine to him and takes him off to a bedroom where…well…he becomes a man. It’s this scene in particular that will have audiences squirming and appears to take influence from Larry Clark and his controversial films notably, ‘Kids’ which this resembles in many respects. It’s no accident that after this scene Hill plays Nirvana’s version of ‘Where did you sleep last night?’ on the soundtrack. Hill has drawn great performances from his cast of teens with Stevie in thrall of the older boys and the film embraces the sheer exuberance of youth in the lazy hazy summer sun. Hedges, who has had a busy year so far with Ben is Back & Boy Erased, as the older brother though very much a supporting role here is very good shown up by Stevie’s friends as not quite the tough guy he thinks he is in a scene played out in the street between him and F**kSh*t that’s all  too real and only too often seen on UK’s streets. It’s a downward spiral that Stevie is sucked into and Suljic’s angelic face only makes his plight more heartrending and there’s a grimly ominous pull to what surely must be something catastrophic.

Running at only 85 minutes and shot in a 4×3 format Hill has perfectly captured a moment in time set to a woozy, trippy soundtrack and Mid 90s never outstays its welcome but is likely to have you asking just where are the parents that allow their kids to do all this.