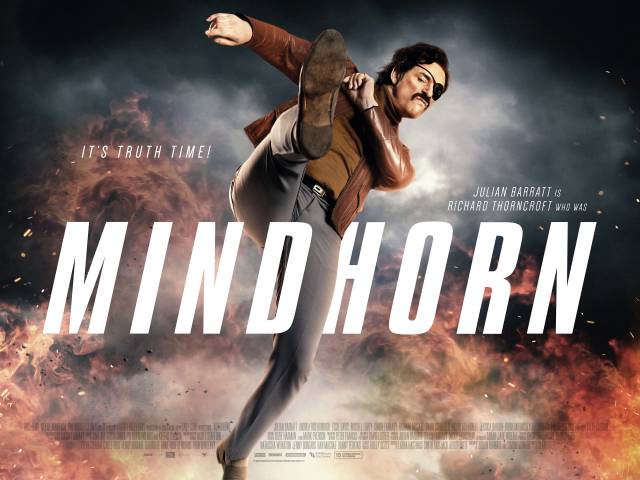 Several TV series over the decades have had cult appeal which a rather bitchy TV producer we know equated with small audiences. So whilst ‘Vic Reeves Big Night Out’ was a cult hit it was also extremely influential. Julian Barratt along with Noel Fielding made The Mighty Boosh another cult TV series especially amongst students and went onto make, albeit a rather poor, film. Fortunately for Barratt, who was always the better performer, he has found a better film for his talents and together with Simon Farnaby (best known for the excellent kids TV Horrible Histories) they’ve mined their experience of TV and embittered actors and come up with ‘Mindhorn’, a fictional Isle of Man based TV show with an enjoyably ludicrous premise of a cop given a sort of bionic eye that enables him to ‘see the truth’. Clearly both Barratt and Farnaby are all too familiar with this sort of daft TV idea and like the rest of us still trying to eradicate ludicrous 80’s TV crapfests from our memories whether it be crime solving talking cars (Knight Rider), or perhaps worst of the lot, a man who can change himself into any animal to fight crime (Manimal) Mindhorn fits in well. As actor Richard Thorncroft who plays Mindhorn, Barratt’s character is further embittered about the series having been cancelled only to find one of the show sidekicks gets a spin off series that is far more popular than his ever was and inevitably a jealous rivalry develops between him and a supporting character played by Steve Coogan.

Out of work and reduced to regional TV adverts Thorncroft struggles to make it big again and in one of the films many funny scenes he berates his agent  for more not getting him more work much to the amusement of Simon Callow who plays himself and share the same agent as Mindhorn. Callow’s high profile cameo is one of several with the most notable being that of Kenneth Branagh of all people in an hilarious audition scene which Thorncroft is completely unsuited for.

Resigned to middle aged spread and having to wear a wig the Thorncroft is finally given a life line when the Isle of Man’s only serial killer known as The Kestrel is hunted by police. So delusional is The Kestrel, which sees Russell Tovey hamming it up, that he believes Mindhorn is a real cop and insists on speaking only to him. It’s comeback time and unsurprisingly it’s of no surprise that when Barratts’ alter ego is called in he’s more of a hindrance than a help and the police commander rightly regards him as an idiot. Into the mix is thrown  Thorncroft’s co star and ex wife Patricia (Essie Davies) who now works for Manx TV but who takes an journalistic interest in the story but which he takes as a cue to rekindle their love interest. She’s now shacked up with the shows old stuntman played by Simon Farnaby with the most bonkers Dutch accent committed to celluloid and their petty rivalries and banter is great fun in their quest for one upmanship in front of Patricia.

Much like its fictional TV series the plot is something that wouldn’t be out of place on an 80’s Saturday  tea time series but this is one of those comedies which will divide audiences with its wilfully daft jokes. It’s a better first half with some great laughs at the expense of jobbing actors which look suspiciously like they’ve been borne from experience. Steve Coogan again proves that there is  far more to him than Alan Partridge and successfully avoids slipping into any Partidge like tics which he sometimes seems to subconsciously adopt on occasions. Most unlikely of all though is the notoriously gruff Ridley Scott who has had a hand in producing this.  This is a world away from Alien Covenant which is just around the corner and he’s not known for comedy unless you count Russell Crowe’s accent in his version of Robin Hood. But for our money this is one of the funniest films of the year.

You can see Julian and Simon introduce the film here on the AGF YouTube channel here: