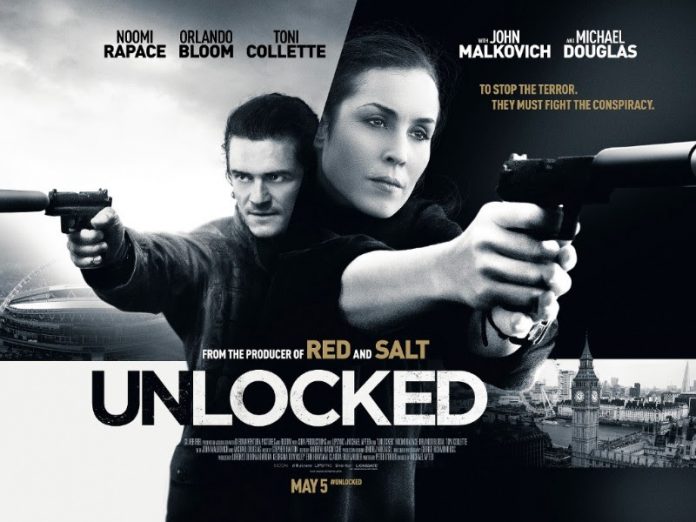 The story of a door left open was never going to make a great thriller so instead  ‘Unlocked’ has drawn on the world of international terrorism where the title refers to a CIA interrogator (Noomi Rapace)who has left the job horrified at a Paris bombing she was unable to stop but much like the mafia just when you thought you got yourself out they drag you back in.  So her career at a UK job centre is short lived as her covert employer drags her back. At the same time a Muslim Imam instructs a convert to deliver a message to relay to a white Muslim convert intent on unleashing a deadly biological agent in London.  Their plan would have gone swimmingly if he hadn’t been apprehended and Rapace is bought back to interrogate him in a convincing scene where she subtly gets what she needs from him so as to locate Terry Terrorist. But this is one of those espionage thrillers where all is not as it seems and few seem to be who they say they are. And with Toni Collette along with John Malkovich as senior heads of UK & US agencies Rapace soon finds herself on the run and at the centre of a plot where time is running out for everyone if the attack is to be foiled.

All starts off well with some terrifically tense sequences until it all begins to fall apart with all the standard  thriller genre tropes even going as far as to use that old favourite, the countdown clock. Which is a shame as director Michael  Apted (who has form with spy thrillers having directed Bond film, ‘The World is not Enough’) has assembled a good cast which also includes Michael  Douglas & Orlando Bloom too and at one point it seems that as soon as one famous face has done their bit along comes another to take up the mantle. Malkovich is silkily sinister and again seems to be hamming up the role to entertain himself on set as he spits out lines and chews up scenery sometimes with just the arch of an eyebrow  in what seems to be becoming an alarmingly yet usual campy  manner which is great for him but hardly lends the proceedings any credibility. It seems a lifetime now since some proper heavyweight performances from him in films such as ‘Shadow of the Vampire, Of Mice and Men, and Dangerous Liaisons but presumably he has bills to pay like everyone else. But he’s not the only one here which is a curiosity with Toni Collete all bleach hair and gaunt looking like an Annie Lennox tribute act, a beefed up Orlando Bloom digging out his cockney geezer voice ready for pantomime season, and Michael Douglas who doesn’t seem to have aged in the last 30 years yet is now taking fairly generic roles rather than the edgy ones he took in Falling Down, Fatal Attraction & Disclosure. It’s only really Rapace who really gives it a degree of gravitas though it’s hard to reconcile her diminutive stature with the brutal beatings and fights she gets involved in. The plotting resorts to too many clichés with no one being trustworthy and Rapace, as seen in so many thrillers these days, roping in innocent members of the public into highly dangerous situations and an elusive villain they locate all to easily. Setting itself up as a franchise it’s likely that this will stay locked in a franchise of one film only.