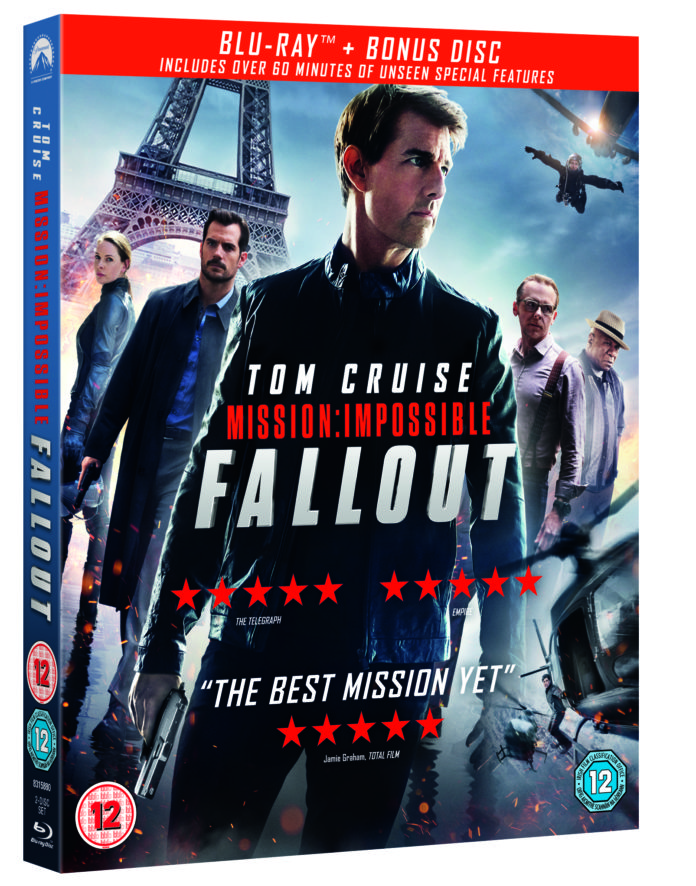 More than anything actor Tom Cruise seems hell bent on performing his own stunts and the featurettes here make clear that the stuntmen have a sneaking admiration for the actors ability to carry out a whole load of stunts and the disc has a feature on each of the high octane stunts he performs.  The one where the production made a big deal about yet on film doesn’t’ quite come across as dangerous as it certainly was to do is the HALO parachute jump. The High Altitude Low Opening parachute jump had Cruise training with some of the world’s best and in the film the scene is a product of three separate jumps cleverly cut together but the featurette makes clear just how dangerous it was with the crew and Cruise having to inhale pure oxygen for 20 minutes before they took off to prevent suffering from the ‘bends’ they would hit speeds of up to 200 mph when falling. Add to this they only had a 3 minute window for light and that the stunt was so dangerous it had to be filmed over open land in UAE. Shooting the scene was made even more difficult that Cruise and camera man had to maintain a constant distance to maintain focus only compounds that this was as technically difficult to perform as it was dangerous to carry out.

But this is just one of many major stunt sequences in the film because as Cruise states the film was meant to be the culmination and tying together of threads from the previous films and everything was thrown into the mix when it came to spectacle. So apart from the expected car chase brilliantly choreographed around Paris ironically by a stunt coordinator on crutches with production only having a one hour window of shooting a around the Arc De Triomph when the road would be shut.

There was the cliff side faceoff shot on a Norwegian national treasure that could only be accessed by helicopter for the 150 strong crew, but the other big stunt was the helicopter chase with Cruise piloting and performing is own stunts including a dangerous corkscrew vertical fall. The fact that Cruise started to learn how to pilot two years before the film to get his license and then spent 7 months learning how to do manoeuvres is testament to how committed he was to performing his own stunts. The sequence was shot in New Zealand with a chopper adapted to have camera rigs fitted and looking into the cockpit as Cruise performing the stunts.

The Mission Impossible Fallout blu ray is a fascinating look into the stunts but many fans commented on two of the stunts that were never seen in the film. One where Cruise swings across the heads of a party in The Grand Palace , Paris is seen in a deleted scene montage which has a brief commentary by director Chris McQuarrie. It’s here that the director states that he doesn’t believe in extended cuts or directors cut or anything like that and this was a sequence that they bravely cut to keep the films pace. The disappointment is that the featurette is a montage rather than stand alone scenes and the other sequence which is covered at all is that final shot in the trailer as Cruise drives at speed towards an oncoming tanker that’s blocking the entire road. It’s a great shame and there seems little reason to omit these sequences as standalone deleted scenes. Though it does cover the set pieces to varying degrees it doesn’t always go into the depth that you might hope. Understandably the film makers are keen to stress that these stunts were not done with green screen or CGI you would like to know how such apparently potentially fatal moments were avoided such as Cruise crashing his motorbike at speed into a car flying over the hood onto the Paris cobbled street without a helmet all in one shot without sustaining a head injury.

Perhaps the biggest irony that’s not mentioned on the Mission Impossible Fallout blu ray is that having clung to helicopters, jumped out of planes, performed stunts in cars, clung to cliff faces and performed death defying stunts in a self piloted helicopter was a simple jump across a roof top where he broke his leg that shut down the production on the film for two months.

Mission Impossible Fallout blu ray is a decent disc which misses some opportunities to be a really great disc but that doesn’t take away from what was one of Summer 2018’s best films.