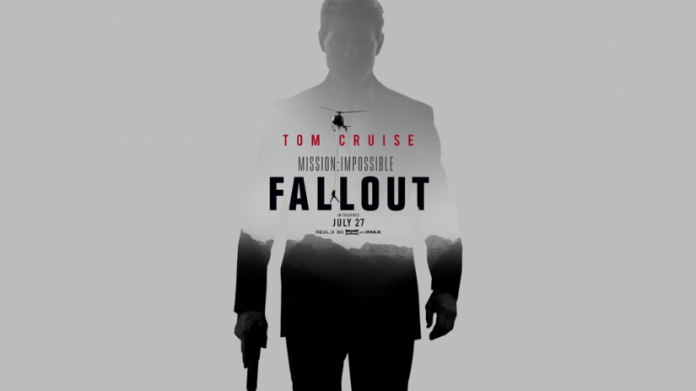 There’s been  some talk about what the title Mission Impossible Fallout means and our understanding was that the film was going to be set at a damaged Russian nuclear power station where all male staff were told to wear Y-fronts otherwise Chernobyl fallout (‘You’re fired!‘– Ed).  Turns out that this sixth entry in the franchise is a continuation from that last film Rogue Nation where former British agent turned anarchist bad guy Solomon Lane (Sean Harris) was captured. Despite having been captured he’s still behind an organization of similar rogue agents set on bringing about a new world order.

So back on the scene is Ethan Hunt (Tom Cruise) who is indirectly responsible for 3 lumps of plutonium being on the open market which Lane’s organizationis keen to use for nuclear devices. For the first time in the franchise Christopher McQuarrie returns as both writer and director and as with Rogue Nation, Way of the Gun, The Usual Suspects it’s a convoluted plot full of crosses and double crosses but it’s not too surprising that there’s a double agent at work and his identity is not a difficult task to work out just who that is.

Mission Impossible Fallout sees many of the regulars return (Ving Rhames & Simon Pegg looking somewhat haggard in this outing) several of the cast from the last film (Rebecca Fergusson & Sean Harris looking like he’s competing in a scraggy ginger beard competition and sounding like he’s lost his throat lozenges) and new addition Henry Cavill (replete with his moustache that caused so much problem for the Justice League reshoots) & Vanessa Kirby as the rather sultry and coquettish White Widow and the return of Michelle Monaghan as Hunt’s ex-wife who’s been absent for several films to date.

All characters apart from Hunt’s closest clan have a whiff of duplicity and untrustworthiness which is stock in trade for the MI films and of course there’s the action set pieces and what set pieces they are with Cruise performing them himself and confirming that he’s both certifiable and an insurer underwriter’s nightmare. Much has been made about the HALO parachute jump which, whilst apparently dangerous to do, doesn’t quite come over on screen (though it’s still a decent sequence) add to that a car chase through Paris which is stunningly orchestrated with Cruise without a helmet zipping in and out of the traffic at high speed on a motorbike trying to evade his pursuers which is probably easier than avoiding the appalling French drivers and there’s a great helicopter sequence the climax of which owes much to Cliffhanger. Add to that a brilliantly brutal fist fight in a men’s toilet that gives Schwarzenegger, who previously cornered that market with scenes in Terminator 3 & True Lies, a run for his money. Of course the stunt that will draw most attention is the one that shut down production for several months, namely Cruise jumping across the roof tops of two buildings which you can see here. Well that’s still here complete with broken ankle hobble which then sees Cruise in the contractually obligatory sprint shot showing that at 56 he’s fitter than a man half his age.

At almost two and a half hours Mission Impossible Fallout is the longest film in the franchise and as McQuarrie’s script deprecatingly states it’s still, ‘a bunch of grown men in masks playing Halloween’ and there are several callbacks to previous films in the series.  Perhaps without the iconic stunts and shots that have made previous films (clinging to the outside of an airborne plane – Rogue Nation, or hanging onto the side of a skyscraper using sticky gloves – Ghost Protocol) Mission Impossible : Fallout is still one of this year’s best summer blockbusters.