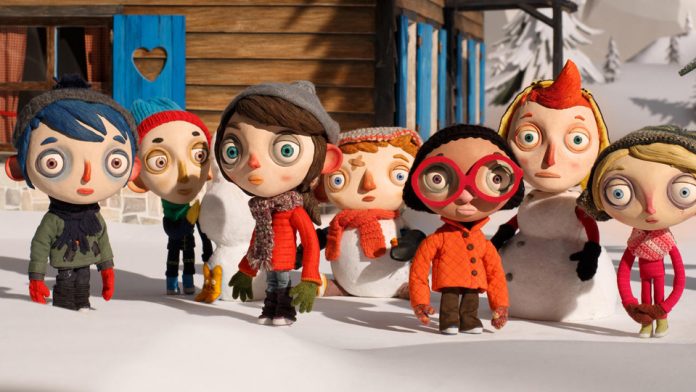 Wilfully odd titled film aren’t always what their titles might lead you to believe so anyone expecting the adventures of Colin Courgette and his friend Percy Parnsip will find that courgette is the nickname of a young boy being bought up by his alcoholic single mother who dies in a tragic accident.  Courgette finds himself whisked off to an orphanage by a friendly cop and joins several other children there all with equally tragic back stories which have bought them also to the orphanage. This is one of those animated films which is really for adults because this is utterly heart rending in part with melancholia writ large whether it be courgette desperately keen to keep an empty beer can so as to remember his mum or the child that rushes to the orphanage door whenever there’s a visitor hoping it’s their mother come to collect them. It’s a film not afraid to pull at the heart string as each waits to be adopted but bought down to Earth with a bang by the alpha male child in a moment of devastating truth as he tells them, ’No one wants to adopt kids as old as we are’.  The arrival of a new girl puts the cat among the pigeons with alpha male challenged by her and courgette’s blossoming puppy love for her. Their blossoming puppy love is the lighter moment and it’s uplifting to see them and the rest of orphanage taken for a break to a snowy retreat to play in the snow and there’s a joyous scene of them dancing at a makeshift disco revelling in their own individual grooving and is as joyous as anything you’ll see this year as they lose their inhibitions to the music.

Based on a series of children’s books this can be seen in both the English dubbed version or subtitled format. Either way is equally delightful. With the emphasis on friendship and family it’s not only the kids who pine for affection as the cop who originally takes care of courgette easily identifies with their predicament having been cruelly deprived by his ex wife of ever seeing or speaking to his child again. ‘Sometimes children leave their parents too’ he tells courgette is as upsetting for any parent who has gone through the same cruelty.  All this makes it sound unbearably sombre and it’s not as dark and melancholy as it might sound because this is equally funny and utterly enchanting and at only 65 minutes long it never outstays its welcome in one of our favourite films of the year so far.